I have been aware of Mr Wigz for a long time, ever since I saw a collaboration he painted with SPZero76 in Gloucester Road back in 2016, but I have seen little of his work since. Finding this enormous piece in Cheltenham, which was painted for the 2018 Paint Festival, was both a surprise and pleasure.

I was fortunate enough to spot him at this year’s festival and chatted with him for a little while as he was finishing off his piece (to follow). This fantasy piece though is quite magnificent and uses the wall to great effect creating a window into another world, or reflection of our own (in better times). There is a depth to the piece and plenty to look at and think about. There is something about the subject matter that reminds me a little of the work of Xenz. It is a fine piece indeed and how lucky we are that the Cheltenham Paint Festival organisers are trying to keep the walls from previous festivals intact. 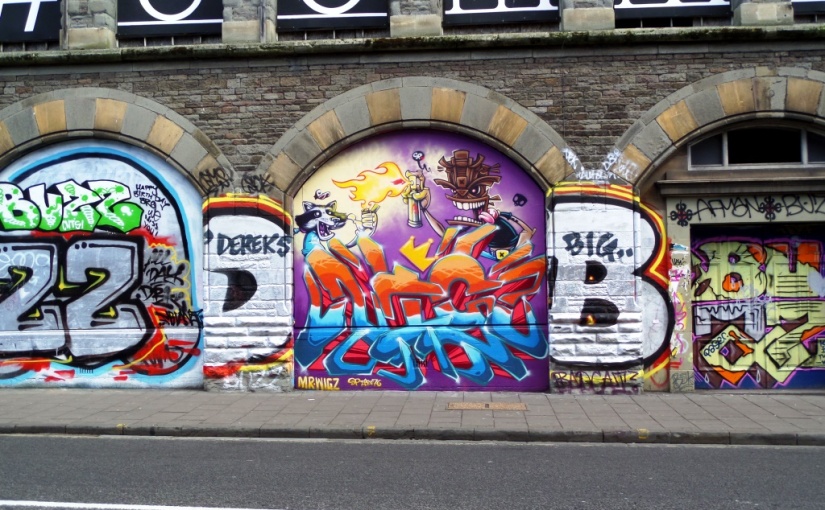 Over the last weekend the fabulous pairing of SPZero76 and Mr Wigz got busy on one of the middle arches of the Carriageworks. Their combinations work very well and have a vibrancy and humour about them.

SPZero76 works on the characters, which often feature a raccoon, which is odd because despite them appearing in the live version of Disney’s 101 Dalmations, set in the UK, we don’t have them in this country. While Mr Wigz provides the wildstyle burner beneath.

Their last piece I know about appeared back in February, further North on the A38…here is a reminder.

I like their work, and it is great to get an untagged picture. Any new pieces at the Carriageworks never last long in their pristine condition.

A wonderful new piece by SPZero76 has recently appeared on the side wall of Poppers, a party shop on the Gloucester Road. It would seem that SPZero76 has been rather busy lately, with a recent piece also appearing in Shoreditch, London. UPDATE 4 March 16: via Twitter, SPZero76 informes me that the wildstyle burner in the centre of this piece is by Mr Wigz, so it is a collaboration between the two.

SPZero76 is an illustrator and street artist who is based in Bristol and London, who has a great website where you can find out more about his work.

I particularly like this new mural because it brightens up what was previously a rather dull alleyway. There are several references in the work including to Lost Souls (his crew) and to Massive Attack (Robert del Naja is an active street artist, 3D).

A really great new addition to my local area.