I have waited a very long time for this, so I will enjoy it while it lasts. It was the wheatpastes of Kid Crayon that first drew me in to the world of Bristol street art some five years ago, but then he moved on to spraying and left his paper days behind him, until a week or so ago. This was a little trip down memory lane with his partner in crime Jimmer Willmott.

These two got together and pasted up some rather fun greyscale pieces. Jimmer Willmott opting for a sketch of one of his figures with a ring doughnut for a head. Surreal, quirky and fun, I could ask for no more.

Alongside doughnut head Kid Crayon has pasted a party animal who doesn’t look too much like he is enjoying the party. Great also to see the Crayon making a comeback. Hurrah for this little foray into wheatpasting from these two… more to come from this session. Please don’t leave it quite so long before the next batch. 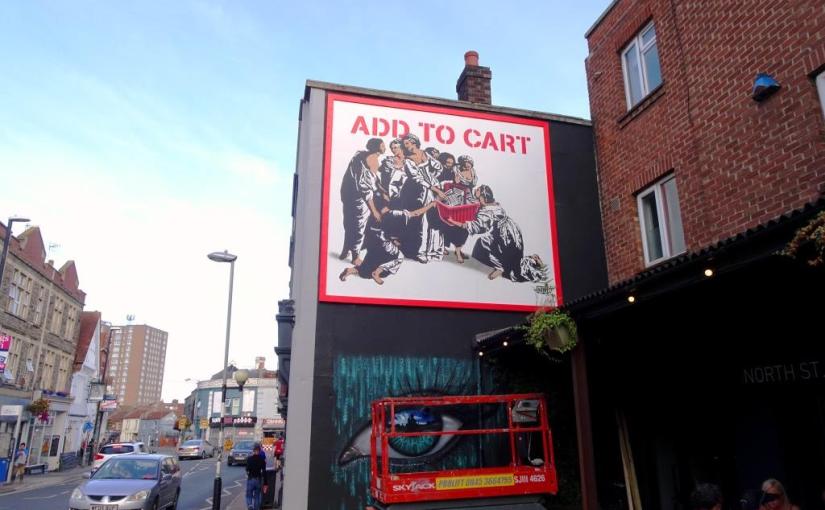 I think that I happened to be passing by this piece very shortly after it had been completed by Goin, judging from the presence of the scissor lift just below it. This striking piece is yet another remarkable work organised by Upfest as part of their Summer Editions project in lieu of an Upfest festival this year.

Goin is no stranger to Bristol, but his pieces tend to be associated with his visits for Upfest related initiatives. This magnificent and really rather large stencil entitled ‘Add to cart’ is clearly a commentary on consumerism, but I don’t know the original artwork upon which this is an elaboration. Any ideas? I suspect that knowing the root piece would add significance to the story being told. I might have to have a little Google session to see if I can find out. In the meantime, enjoy this excellent work.

I don’t get out much,

on the cards today

dives after a leaf 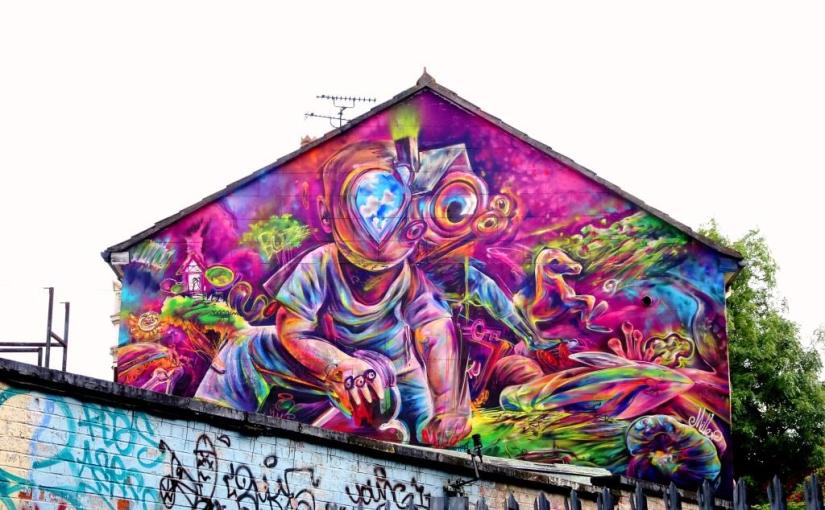 During the early part of September I was away quite a lot and I didn’t have much time in Bristol to go to my usual haunts to find street art. This is always a little tricky, because FOMO (Fear of Missing Out) kicks in. Because the turnover of art in some places is so high, you can miss an awful lot of good work over the course of a fortnight. Of course I missed quite a lot, but as soon as I was able, I walked and drove to as many spots as I could, including Stapleton Road. As I was slowly driving along, I became aware of a pinky-purple flash on my left with my peripheral vision, but when I turned to look, I had passed whatever it was. I had a hunch it might be something I would be interested in so pulled into a parking space and walked back. I was rewarded with this magnificent new piece by Tom Miller, which I had seen on social media, but had no idea where it was.

I have posted many works by Tom Miller and have a gallery of his amazing pieces on Natural Adventures. This piece though has something really special about it. It was painted on a wall that had a few tags on it, but was nothing to write home about. Tom Miller has transformed it into a focal point for this little stretch of Stapleton Road in Easton.

So, what is going on in this piece? If I am honest I am not too sure. His style is rather surreal and busy and I think there is a lot of symbolism and personal baggage in the piece. The central character’s face has been replaced with enlarged eyes and a house and to the right is a pony or something like that, a toy perhaps. The whole piece is extremely colourful and like many of his works, full of movement. I expect one could spend hours trying to analyse and deconstruct the piece, but that is an academic exercise that might yield utterly incorrect conclusions. Perhaps the best way to understand the piece is to ask the artist himself, which I will do next time I see him. Brilliant and unusual piece. 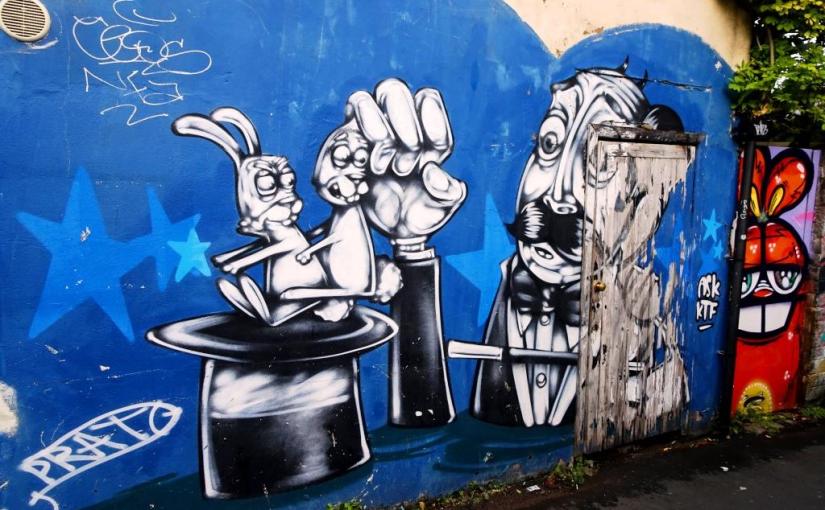 This is the second piece I am posting from St Mark’s Avenue and it is a rather fun piece by Sepr. Judging from the weathering of the paint on the door, it looks like it has been here for some years. In line with pretty much everything in this alley, there seems to be remarkably little tagging.

The piece itself presents a magician pulling a rabbit from a hat although rather than just one rabbit, he is actually pulling two rabbits, in a compromised state from the hat and they don’t look too pleased about it. I have long been a fan of Sepr’s work and I love the retro influences in his style that make his pieces so distinctive. Great piece with a great story beautifully executed, you can’t ask fo much more than that.

When green turns to gold

and persistent rain slaps down

I realise that graffiti writing isn’t everyone’s cup of tea, and it is one of the reasons that I try to mix up street art pieces and graffiti writing pieces on Natural Adventures, but I do have a mission to grow an appreciation for writing and writers whose work is often highly technical and commands supreme spray painting skills. This piece by Veks is really out of the top drawer.

Some of the things that make this piece so good include fantastic variations of colours blended nicely through the letters, an outstanding selection of complementary colours bounded by a very tight and sharp yellow border, a fine background and most of all a nicely balanced design, not over-complicated or too fussy. Great work from Veks.

It feels like an absolute age (and it probably is) since I last posted anything from Jee See, and here on one of the ramps at Dean Lane he recently painrted this little collaboration piece with Pekoe. I think it might have been at the rescheduled DLH (Dean Lane Hardcore) event a couple of weekends back.

Jee See has written a rather nice 3D rendition of his moniker which adopts a whole load of very nicely done shadings, hatchings, drips, cracks and colour fades. So good to see him back in action.

Just to the right of Jee See’s writing is another one of Pekoe’s beautiful ladies in blue, a colour she often favours, and with a little tear beneath her eye – what does this tear tell us about the srtist? Is there some inherent sadness there? There is a clue in the top right of the piece which indicates that it is a tribute to Janet. Tribute pieces are often painted with a little extra love and have a poignancy to them.

I am so enjoying finding and appreciating Pekoe’s work which just seems to be on a steady improvement.

The world’s in a mess

what are we to do?

I have never known anything like it in my life and I am afraid. The extremists (particularly the far right) are seizing power and disregarding/dismembering those who stand in their way. To win at all costs seems to be the narrative and one that is popular amongst ignorant followers who don’t care about detail or facts or collateral damage just so long as they win and get their way, and get to crow that they are on a winning team.

This state of affairs couldn’t be any further away from consensus politics where ideas are discussed on their merits, not on their origins. Good ideas are not the property of one party or another, or at least they shouldn’t be. Had Theresa May been more inclusive in her approach to Brexit and created a cross-party working group from the start we would probably have left Europe by now, but instead she decided to lay down red lines… remember those? Then the chaos began.

In the UK, the worst part of all of this is the dominance of an unelected advisor to the Prime Minister, Dominic Cummings, who is pulling all the strings and playing Boris Johnson for the opportunist fool he is, and what does he get from all of this? He gets the satisfaction of winning, as if it is an intellectual game. He cares not one jot about the outcomes, simply that he orchestrated a win. ‘America first’, ‘win at all costs’, ‘bring back control’ – these are all jingoistic slogans designed to whip up superiority, strength and a winning mentality, while utterly ignoring reason, facts, and the damage inflicted to achieve the win.

My biggest fear though, and the reason for this rant is the way our Prime Minister and his inner circle are attacking and undermining the Supreme High Court and the judiciary more generally, suggesting that they are enemies of the state. Academics and experts have already been relegated as unimportant (Michael Gove has been particularly rampant in this field). I am afraid that the political landscape mirrors some of the darkest periods in European history. Each day trawls up yet another inflammatory or provocative episode that encourages the right wing hoards to gain momentum and confidence. I am afraid for the country I love.