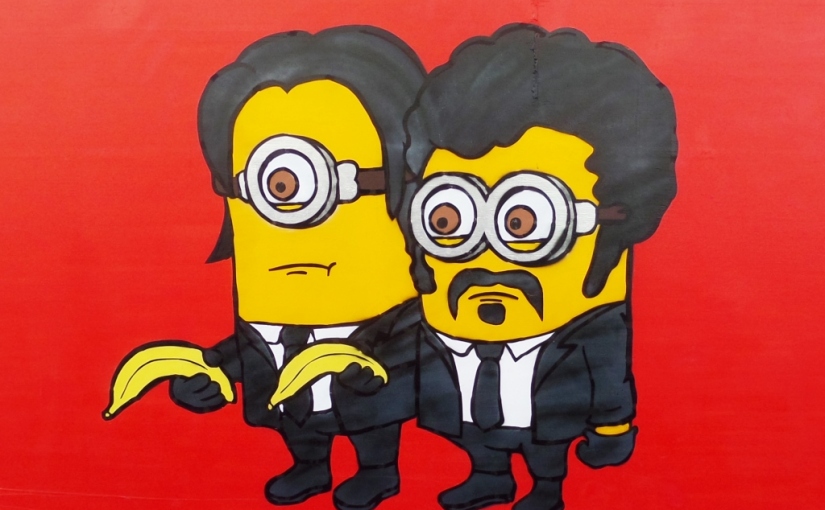 This is the first post from North Street, the home of Upfest 2015. There will be dozens more to come.

This wonderful and humorous conflation of Minions and Pulp Fiction is really striking, and is an extension of the original Banksy Pulp Fiction piece.

It is by another Bristol artist, Angus, who has only been creating works on the street for about a year. He is known for bringing well-known characters and objects into his work.

withdrawn and blending into

at my heart, tugging away

This wheatpaste is a recent addition, slapped on a rather over-tagged door hoarding in the one-way section between the back entrance of Colston Hall and Colston Street in Bristol.

I have no idea who it is by, but it appears to have been initialled IM. I have tried to find out who this is, but not had much success.

There is something rather peculiar and sad about the face that I like. I’ll certainly be looking out for more. 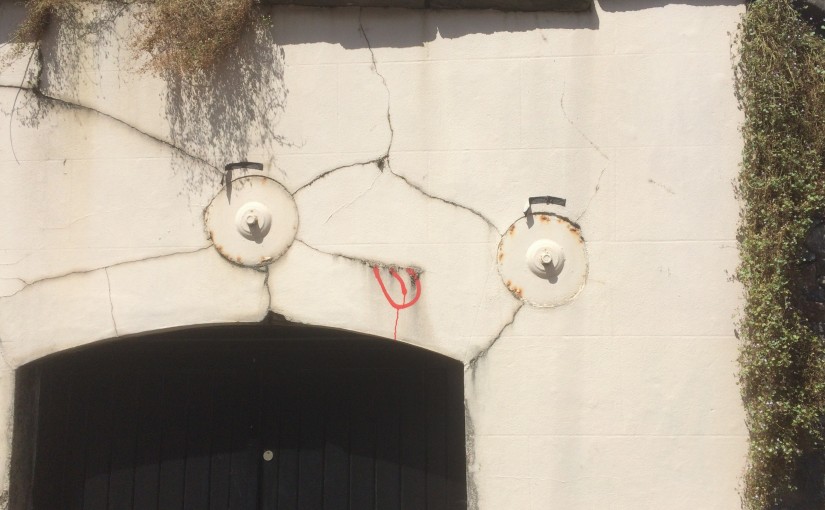 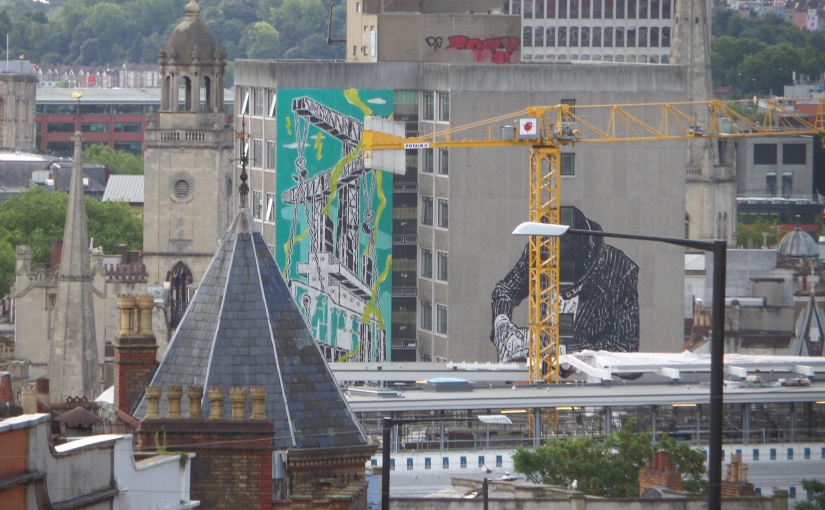 ah! the stuff of life.

A beautiful commission on an outside wall of the excellent @Bristol museum. It is called ‘The Honey Bee’, and highlights the importance and plight of our pollinators.

ATM is an artist who went to art school in Sheffield and now lives in London and is famous for his striking pictures of birds. I am drawn by his highly ethical position on the natural world, and his images are reminders of species at risk, that were once abundant. My only criticism, which seems a little harsh, is that his work is not very edgy, and I like a bit of edge.

I understand from his Twitter feed that he painted a mural last weekend at Bristol’s world-famous Upfest. I will seek it out soon.

by God she was right. 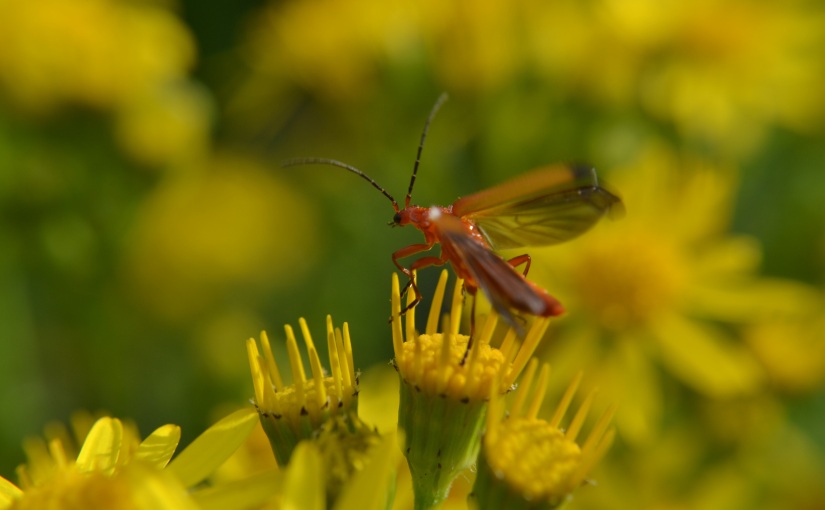 The digitisation of my Falkland Islands journal from 1988 continues, with the following section, in which I reach Port Stanley after a long maiden voyage on the Japanese squid jigger ‘Koei Maru 30. All sections in italics, like this one, are comments or observations from now. I try to keep these interruptions to a minimum and stick to what the 24 year old me wrote.

I was picked up. My prayers were answered. The ‘Beagle’ came for me at about 3-4pm. I shared the trip with a couple of hospital cases from various ships – one had a badly injured arm and winced every time we hit a bump (frequently). The other just looked unwell.

The post was fantastic – to hear from Deb and home. Gavin sent the most incredible letter, which was almost word for word the same as mine (to him). We know each other sinisterly well.

Deb’s letters make me very cheerful, and then very sad – I miss her very much.

I was sad – very sad to hear about Great Uncle John – my mother is so good at these times.

I loved John – I have an outstanding memory of him – about 14-15 years ago, when he, grandpa and I went for a sail in the yacht (Henrietta or Nettie Too) and anchored at a beach near St Anthony’s. We swam ashore – I was assisted on John’s back. I will never forget it (and I never have). The clarity of the water, the heat of the day. Two old men and a young boy swimming. On an outing. It makes me cry. Times gone. Poor John.

In the next few days I will have loads of cuttings to put into this diary.

There is so much to talk about, I will try to spread it out over a period of days.

I am staying at the Malvina Hotel (a little expy, but comfortable).

I rang Deb – but unfortunately she was out at a film – she will be so disappointed to have missed me. Damn.

Instead I rang home and had a great conversation with Ma and Ad. Ad said that David Copperfield being my favourite book, was the ‘best news I’ve had in twenty years’ – jokingly.

Leaping forward to July 2015 – reflecting back on this journal, this is a deeply poignant passage for me. My stepfather, Ad, has since passed away, but as a father myself now, I realise how proud he must have felt at that moment. I was never one who cared much for literature in my youth, but David Copperfield was a major turning point in my life. Ad had encouraged me for many years to read amazing books, but I resisted his wisdom, feigning interest, but I had much better things to do. I now have the same interactions with my own son, and I realise there is hope, and he will have his ‘Dickens’ moment.

Worked all day in the office – statolithing loligo with Andrea? one of the school leavers. They are all very chatty and self-confident. They all seem to have this independent streak.

I was up at 2.30 this morning and couldn’t sleep. It is terrible.

Spoke to Deb on the telephone – it was really good to hear her – she sounded so close. She has sent lots of post and seen my slides – I’m glad she has.

Went to the globe with Crag and met the history and biology teachers from the school – I forget their names, but what a nice couple – completely bonkers. They are actually looking after Andrea at the moment – Stanley is a very small world.

I must mention the sylph-like girl up at Cable and Wireless when I went to phone Deb. She was the first female I have been in any attracted to since I arrived. She reminds me of Deb. Petite, very lively and bouncy, confident and very sweet. I have no designs, but she makes me happy (I’ve only seen her for about five minutes).