How on earth I stumbled on identifying this piece I genuinely can’t remember, but I am pleased to have done so as it has been in my archive for some while. It is a really nice piece of writing by Cokestd, an artist from Budapest in Hungary which he created in November 2016 while on a trip to the UK.

I do like it when visitors come and leave their mark in our city, especially when it is with a piece such as this – I like to think of Bristol as a welcoming place where we embrace our overseas friends with open arms. The piece itself is a beauty, nicely proportioned with great lines and colours.

Although I took this picture in July of last year, the piece is somewhat older than that and is still there today unblemished and untagged. Surely a mark of respect to the artist Soker who produced it.

I have posted quite a few of his works here, but many are lost fairly soon after their creation. This one has stood the test of time, and because of this, I am used to seeing it when driving along Ashley Road in St Pauls. It has become a bit of a landmark. Great colours.

As I post this, I am aware that about a week ago, this wall has been repainted…I think with another Soker piece.

behind vines and artichokes

shielded from the world 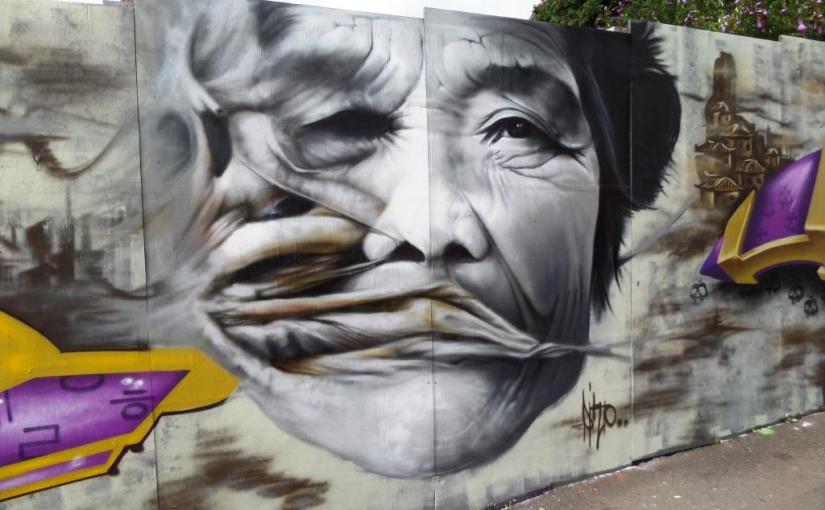 I saw this magnificent piece at a couple of different stages in its genesis and what a masterpiece it turned in to. It is by Pikto, an artist who has been working on street art and graffiti art for some ten years. He has created pieces in London and all over the UK, in Poland and Denmark.

This is really eye-catching and different, combining a photorealist technique with a rather surreal image. I love this piece, it is one of the outstanding images of Upfest 2016 in my view. 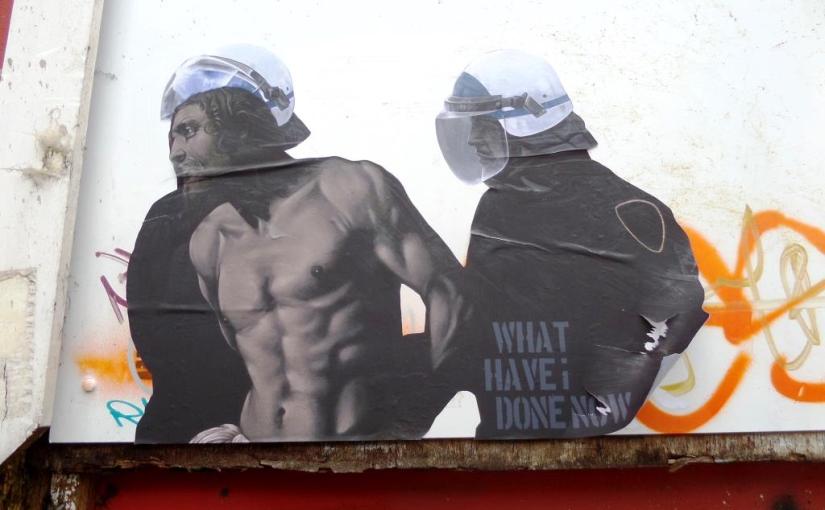 This is a beautiful wheatpaste by the wonderfully talented What Have I Done Now. The piece contains real pathos, and has resonance with Italian frescos…simply replace the police with Roman soldiers.

This is similar in subject matter and style to one of his other Upfest pieces. Great work. 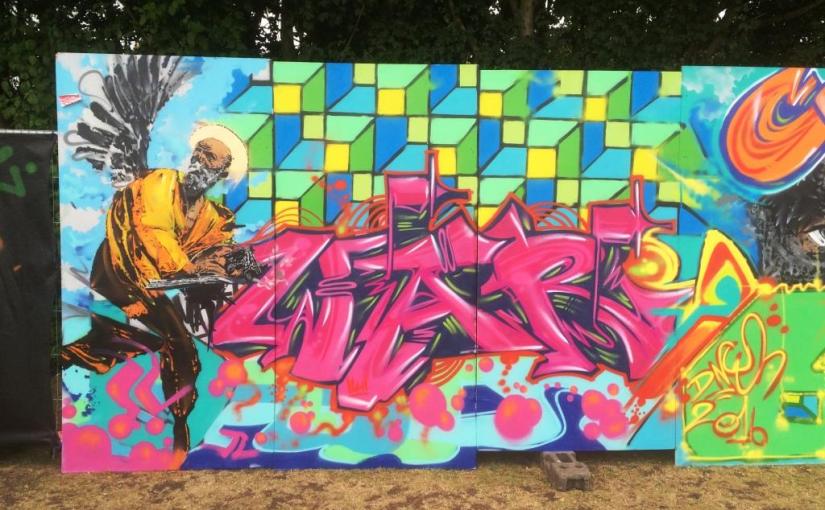 A really colourful collaboration by Bristol artists, DNT, Akarat and Sheva. It is great that as well as visiting artists from all over the world, space is made for some of the local street/graffiti artists who keep Bristolians happy year-round. 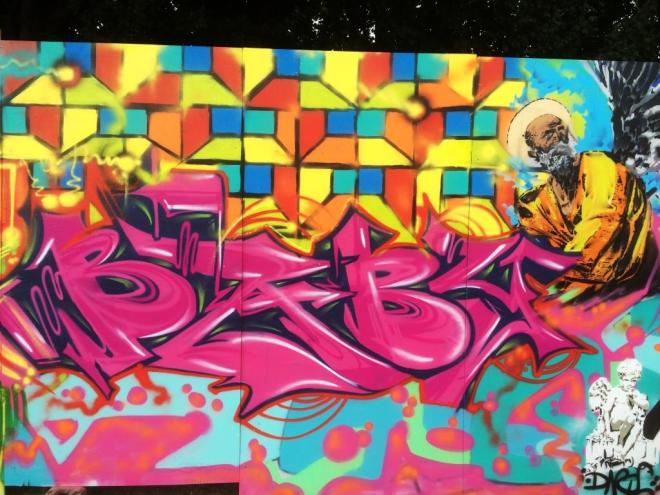 In this large piece, the stencils at each end are by Akarat, the writing and little angel at the bottom right hand side by DNT and the rest I assume is by Sheva. Sheva is a Bristol artist I have not posted about before, and although I am familiar with the name, I am not familiar with his work.

The whole thing, I think is entitled ‘War Baby’ but I am not too sure what the narrative, if there is one, is.

This was definitely one of the brightest and most vibrant pieces of last year’s festival.

found by a kind heart. 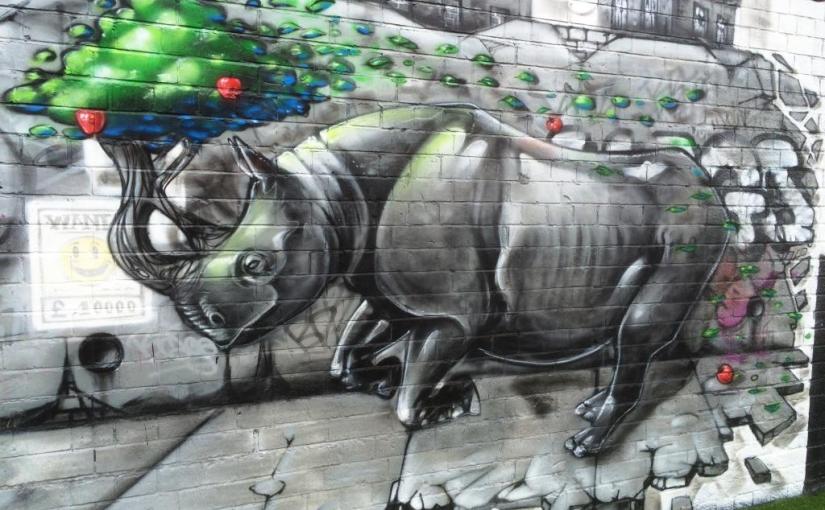 I am feeling under a little pressure to get as many Upfest 2016 pieces posted before the end of July when the whole thing starts all over again. I think that the only way I will be able to achieve this is to shorten the narrative sections surrounding the images, which will be a Godsend for those who don’t like to read, but perhaps not so great for those who like to know a little more about the artists and the impression their work has made.

This is a wonderful piece by Braga Last1 whose owl in Dean Lane skate park I posted only a few days ago. This time he has created a beautiful rhinoceros in the school playground of Ashton Gate School.

The use of monochrome accompanied with colours spilling from the horn/tree on the rhinoceros is skilfully done, and the slight reflection of green on the head and back of the animal has been well thought through. A lovely piece.

One of the larger showcase pieces from Upfest 2016 was this wall in the beer garden of the Steam Crane pub on North Street. It is a wonderful collaboration by the Lost Souls crew, made up of Si Mitchell, SPZero76, Captain Kris and Squirl, although the latter did not participate on this occasion.

This was certainly one of the busier venues during the festival, probably on account of it being a pub, and it was quite tricky jostling for decent pictures of the crew at work. SPZero76 (seated above with the New York cap) though was very comfortable chatting with visitors, in fact I saw him talking more than I saw him spraying.

Si Mitchell (above) worked on the left hand side of the piece, SPZero76 on the middle section and Captain Kris on the right. The whole piece is a frenetic busy think, telling a story of I don’t know what, but I like the result very much.

I returned to the wall some months later to get a decent picture of the completed piece. Of course it is slightly compromised by pub furniture getting in the way a bit, but I think it is possible to get an idea of the great qualities of the piece. The section above of the strange man eating the happy octopus is by Si Mitchell.

The middle section (above) is so typically by SPZero76, with his dog character using a spray can.

The right hand section which completes this rather surreal piece is by Captain Kris, and as part of the seamless sequencing, the octopus makes an appearance in this panel too. A really beautifully worked fun piece.