A gallery of incredible graffiti writing from DBK artist Elvs

All pictures by Scooj 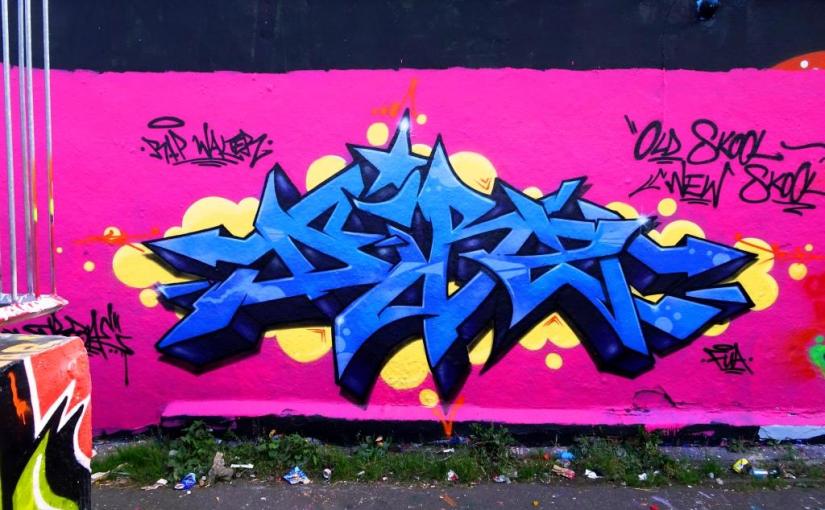 Tight is probably the best word to use when describing the work of Dibz. Always meticulously thought out, clean lines, perfect 3D shading, crisp fills and more often than not, fabulous colour choices. Dibz really pays attention to his pieces and each one is carefully constructed to produce a complete and stylish work.

This one in Dean Lane is simply another example of just how accomplished the artist is, and what he lacks in quantity, he more than makes up for in quality. There is beauty in this, and I challenge even the most ardent critics of graffiti writing not to concede that this is a high quality piece. Nice one.

Deamze left for Hobart about six months ago, and it would be fair to say that his familiar style and frequent high-class pieces have been missed. What a pleasure it was for me then to come across several of his older pieces, all in excellent condition in St Mark’s Avenue, a new discovery of street art gold for me.

This is a bright and joyful piece of wild style writing that spells out DEAM with a little deam inside just for good measure. I’ve no idea how old this piece is, but it is great to be reacquainted with this Bristol master.

Not very often, but often enough to satisfy the appetite, Dibz creates one of his extremely precise and complex pieces of wild style writing. I have seen a few where he uses this black and red combination which he seems to favour.

Somewhere in there it probably says DIBZ, but I’ll be darned if I can find it. The whole thing is just so sharp and crisp, and technically pretty close to perfection. This is what the highest quality writing looks like. Bravo Dibz.

Sled One has absolutely smashed it with this extraordinarily brilliant piece of graffiti writing on the new hoardings at the bottom end of Lower Ashley Road. Sadly, the developers have already placed batten squares all over the hoardings in preparation for advertising posters (I guess). How sad that our world is dominated by consumerism and money. These boards were a creative outlet for Bristol street artists to share their art with fellow citizens. Instead, drivers will have to endure seedy adverts desperately thrusting lifestyle aspirations at us in an attempt to sell their grubby products to swell their shareholders wallets. Capitalism is driving everything towards the lowest common denominator of money. No wonder the world is in a mess.

Back to the art and the joy it can bring to our hearts. Sled One is one of the artists I rate most highly in Bristol and this piece (which spells out SLED) is a fine example of his work. He had to paint this in two sessions as he was ‘moved on’ I think when he was sketching it out. Thank goodness he had the perseverance to come back and finish it off. I hope the artists find a way of keeping these hoardings alive, but I fear it could be difficult.

Yum yum, a lovely fresh hoarding went up a couple of weeks back in Lower Ashley Road and within a flash a whole bunch of writers were on it. They must have been disturbed though, because as soon as the outlines for their pieces gone up, the were apparently abandoned, unfinished. Glad to say though that they went back at a later date and completed their work. Hurrah!

This cracking piece by Smak is a very clever bit of graffiti writing. On Instagram he said it was two for the price of one, and you can see why. If you look carefully, he has written SMAK twice, with the letters from each word intertwining with the other. A masterful piece of work and one that really demonstrates just how good Smak is. Love this and the persistent ‘never say die’ attitude that goes with it. Looking forward to these boards becoming a new street art/graffiti art spot for at least a while. 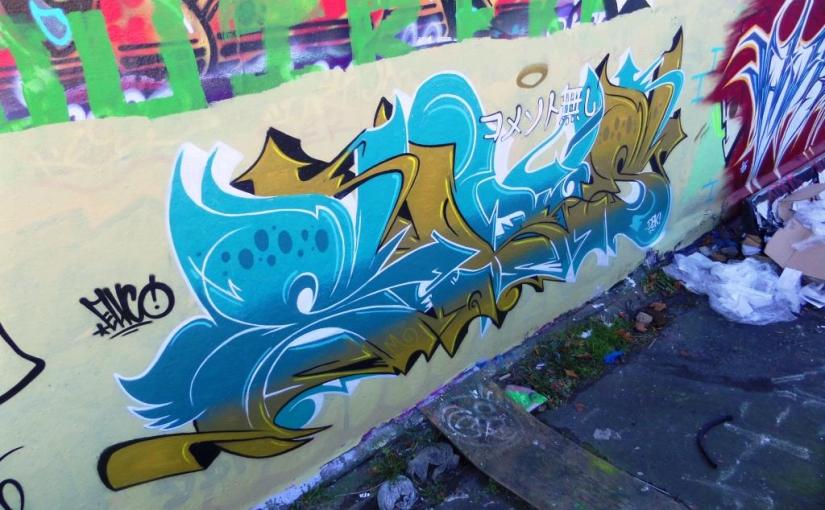 Another overlooked piece from my archives, this time from Elvs in Dean Lane. It is very possible that this remained on file for so long because at the time of seeing it, I didn’t know the artist and so left the picture in a folder. Because the turnover of pieces in Bristol is so high, many that I photograph never see the light of day, but on my occasional trawls through the archives I like to dig some oldies out.

Elvs’ skills are obvious for all to see, and the crisp lines on his distinctive writing style are a pleasure to observe, and in this one, the shading within the letters is masterful. A great piece on the bit of wall that is very difficult to photograph…as you can see.