and a radio cuts through, 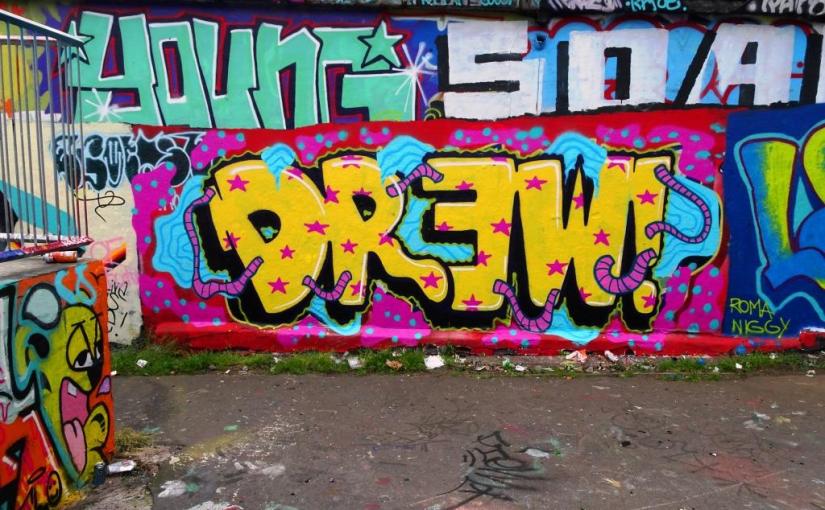 It is great to see Mr Draws back out and enjoying himself. This is a really colourful piece (gone already I’m afraid) that kind of reminds me a little of birthday party wrapping paper. The letters DREW, a corruption of Draws, are connected with some kind of tubing that looks a little like a worm.

What you see is what you get with Mr Draws. There is nothing pretentious about his work and he has developed a style that is all his own. If you are looking for perfect geometric lines or clever 3D shading, then probably best to look elsewhere. I lioke his work because of its authenticity and honesty – rare commodities just at the moment. Brought a smile to my face.

My oh my! Nick Harvey, who paints his street art under the name Kin Dose, has created something very special indeed for Upfest’s Summer Editions project. Although it is a pity that there is no festival this year, there has been ample compensation in the form of these ‘special’ pieces spread across the city, with more to come over the summer.

I knew that Kin Dose was painting a piece, so took the opportunity to go down and watch him work for a while. I have been an admirer of his work for a few years now, ever since I first became aware of him – it was his cat with black eyes at the Carriageworks that first captivated me. It is so good to be able to watch an artist at work and Kin Dose was sketching out the piece the first time I saw it. I asked him quite a few questions (probably too many) and was able to find out quite a lot about him and his work.

He came to Bristol a few years ago and had been known as both Kin and Dose, so combined both to give him his current street name. He used to do a lot of stencils, but said he has become a bit tired of them and no longer enjoys the fiddly cutting element of the technique. Recently he has been doing a lot more photorealistic stuff, and this one must surely be the jewel in the crown.

He explained that he perfected his technique through using air brushes to create these photorealistic pieces, and he also uses a lot of cardboard cut out shapes to mask areas and create sharp, clean lines. I asked if that was cheating and he said absolutely not, which made me feel a lot better, because I have been using card to create straight lines on my own rudimentary efforts.

The piece took about five or six days to complete, and it is amazing to see how a sketched out blur can turn into something quite magnificent. The piece is almost two paintings in one, the girl’s face and the tiger brought together on a cosmic backdrop.

I’m not too sure what the piece is telling us, but I suspect it is something to do with a connection with nature. The tiger’s head is really stunning and holds a captivating expression. His technique is remarkable, it is almost impossible to understand how he gets such fine detail into the fur and whiskers.

Another triumph for Upfest, and anotherr great addition to Kin Dose’s impressive portfolio.

How sweet the cool air 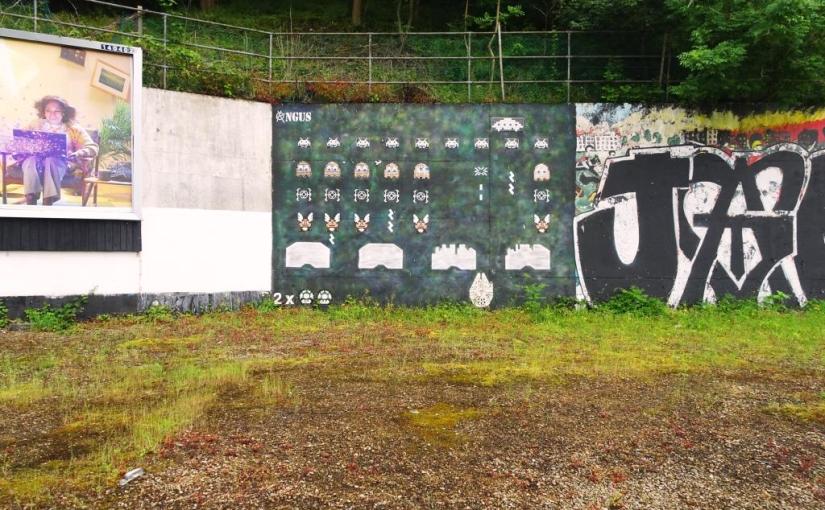 Well I have been very late to the party on this one. It is a magnificent mosaic piece depicting that once ubiquitous video game ‘Space Invaders’ by Angus. I believe it has been here for quite some time. Having looked at the piece on social media, I think that the background has faded quite significantly from its original dark sky blue.

I very rarely drive down this road, and I stumbled upon this and another couple of pieces in this spot by complete accident. It is funny, but it doesn’t seem to matter how much you hunt around in this city, there are always surprises waiting around every corner. I am a big fan of Angus and love his versatility and can-do attitude. Great fun nostalgic piece. 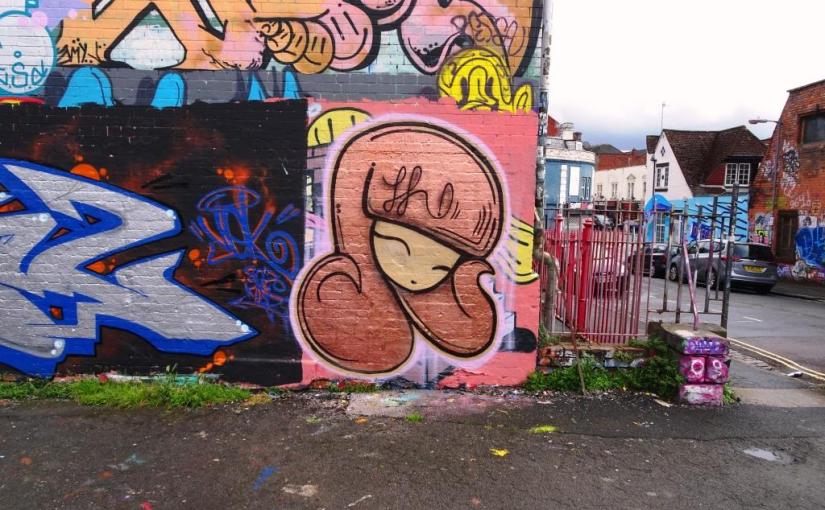 It is the simplicity of Face 1st’s work that I am drawn to. It is unpretentious but full of joy and beauty – uplifting. This modest piece in a copper colour was neatly tacked onto the end of the long wall at Dean Lane skate park. I don’t think it lasted very long, but then nothing here does last very long.

I find this one particularly pleasing on the eye, the lines are good and proportions fantastic and the colour combination works very well. One of the features to look out for in his pieces is the ‘ƒƒ’ signature, often placed on the hair of his beauties. I love this piece.

and happy to be engulfed 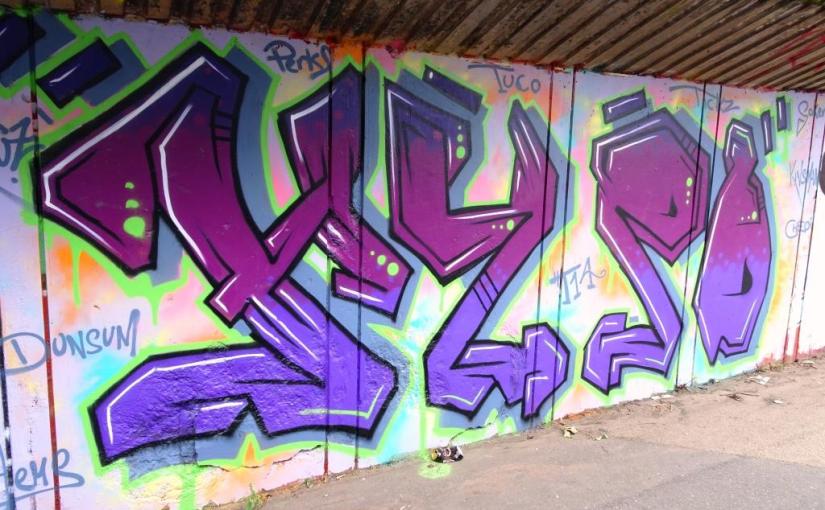 Painted during a bit of a paint-jam down on the cycle path a couple of weeks back, this is a nice bit of writing from Bristol-based artist Hypo. I have only seen a couple of his pieces from Upfest before, so it is great to see something beyond that ‘safe’ environment.

The writing is quite unusual with large spaces between the letters. If his name wasn’t so obviously part of this piece I think I would have difficulty in identifying it, as it isn’t like the other pieces I am more familiar with. Nice though. 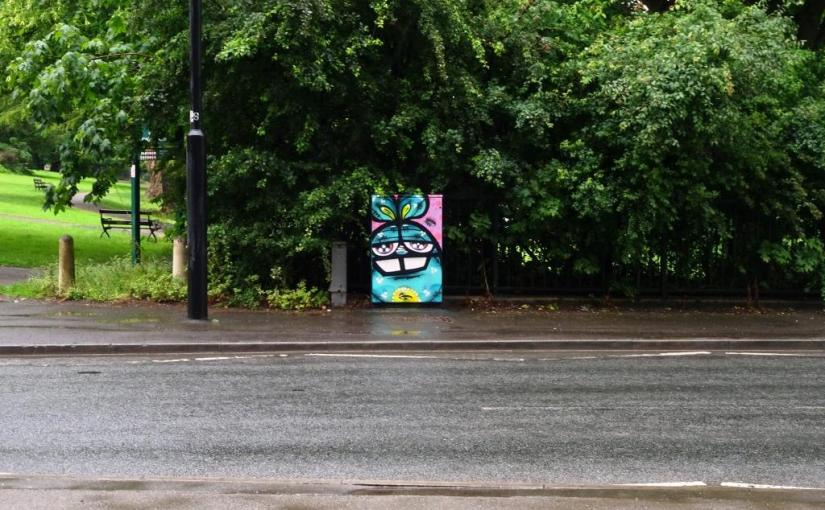 These rabbits have bred like well… err… rabbits. There are dozens of them all over the city, and I have lost count of how many I have posted or photographed, and still I have a whole load in my archive. This particular one is relatively recent I think, as I pass this way quite frequently and hadn’t noticed it before last week.

Nevergiveup, or Nevergiveup Familia (NGU) to give him his full tag lives up to his name and has a determination to brighten up the city with his bunnies, while still keeping his hand in with some graffiti writing. I’m not sure how he finds the energy. It would take a hard soul to consider this bunny as vandalism. What would you prefer? A standard green/grey utility box with nothing attractive about it or a cheerful bunny bringing a smile to commuters’ faces? It is a no brainer, but I am waiting for the local headlines that announce Bristol City Council’s stiffening resolve to eradicate such vandalism. I hope it doesn’t come to that, I and many others in Bristol are fond of NGU’s rabbits.

as strong winds quash such intent

on the British Isles.