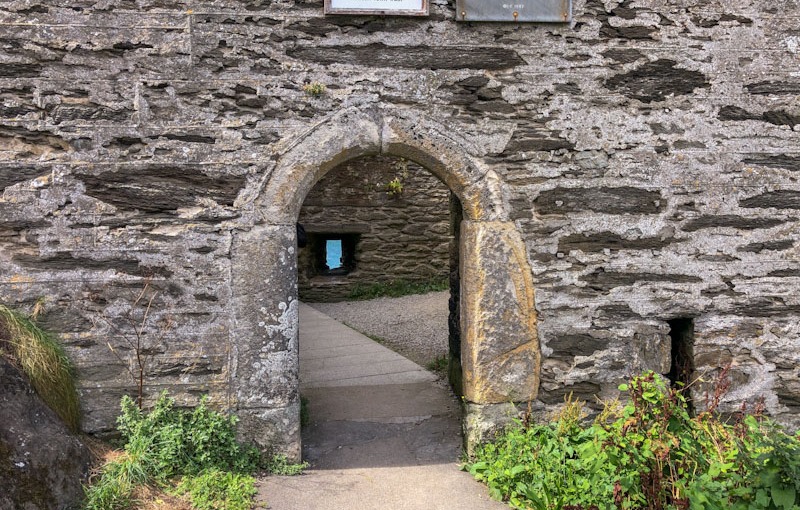 Many of you might not have heard of Polruan but might well have heard of its well-heeled partner, Fowey. These two small towns sit on either side of the Fowey Estuary on the south coast of Cornwall.  Of the pair, Polruan appears to be more of a working harbour, with some docks and dock buildings at the bottom of a town built on a very steep hill. The more affluent Fowey is a favourite for celebrities and second-homers, and is very picturesque.

On the day I took these pictures, my son and I had been fishing from the Polruan Block House point. The block house was one of a pair, the other being on the other side of the estuary in Fowey. These block houses were built to defend the entrance to the estuary, with small calibre cannon and longbow archers stationed in each fort. Unfortunately, the French breeched the defences in 1457 (that’s a long time ago) so they were upgraded with a boom barrier, a thick chain suspended between the two forts. The chain could be raised with winches off the bottom of the seabed to prevent the entry upriver by unwelcome ships.

This chain was confiscated in 1478 by Edward IV, who had been offended by the behaviour of two Fowey locals, Treffry and Michelstow, and given to Dartmouth Castle where a similar defensive arrangement existed. So that was that.

The ruined fort has two entrances, but no longer any doors. The rest of the doors are from the narrow lanes in the upper part of the town. Enjoy the doors:

Well that’s it for another week. I hope to share some more Cornish doors next week.

If you have made it this far, you probably like doors, and you really ought to take a look at the No Facilities blog by Dan Anton who has taken over the hosting of Thursday Doors  from Norm 2.0 blog. Links to more doorscursions can be found in the comments section of Dan Anton’s Thursday Doors post.