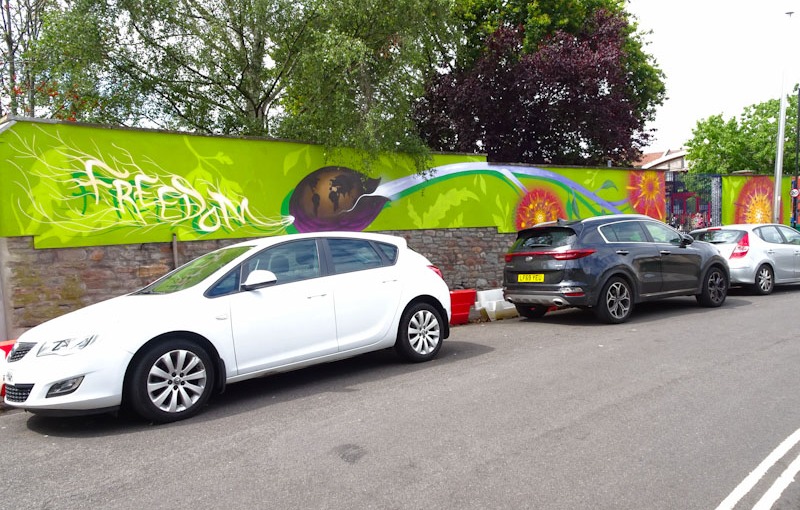 I will begin this post with an apology – the photographs aren’t up to much because of the parked cars, and I don’t think that is ever going to change, so this is the best we can hope for. I found this extraordinary piece by 3Dom while I was hunting down Alex Lucas’ wonderful mural on the Easton Business Centre.

I had to do several double-takes with this mural, because of its rather interesting content. On first inspection it might look like some innocent patterns and flowers, but look more closely and you might recall some of your reproductive biology lessons from school. The whole piece is an homage to the creation of life, presented as a growing shoot.

The ‘flowers’ represent eggs in the process of being fertilised, although you have to look pretty hard to see evidence of this, but it is possible to make out little sperm cells doing their best.

I’m sure that most passers-by probably won’t appreciate what is going on in this mural and the location is an interesting one, being on the perimeter wall of a children’s adventure playground. Initially I raised my eyebrows, but then thought that celebrating the gift of life where children play is probably the best place to site a mural of this nature.

The root end of the shoot is rather more overtly phallic, with additional layers of symbolism. The planed earth is ejecting a stream of sperm which spells out freedom (3Dom) and the shoot of the plant is growing out as if from a seed. As I said, this is an extraordinary piece, and well worth a closer look if you find yourself in the area.