The extraordinary pieces on Cattle Market Road from last summer were beginning to get a bit tagged up and have recently been fair game for new work. This is one of the new collaborations to appear there, by Acer One and Conrico.

It seems to me that Acer One is pretty much up for collaborating with anyone in Bristol who can chuck paint at a wall. Here he gives us a ‘LAZY DAZE’ block of writing in his geometric font on a beachy backdrop painted by Conrico. Acer One’s letters always play tricks with my eyes, sometimes when I look at the lettering it is completely flat pattern and I can’t make out the shapes, other times, if I stand further back, the 3D effect kicks in. Very clever stuff.

Conrico is a busy artist who paints loads of walls, but often in places unfamiliar to me, so he is somewhat underrepresented in Natural Adventures. In this collaboration Conrico has created an island paradise setting with some fun elements such as the exaggerated wave and little yacht, and the crab waving a placard which reads ‘Oli T, Conrico Steez, Acer One’. Which brings me to the point of the piece, which is a tribute to Oli T’s original Lazy Daze piece painted in Kingsdown in the early 1980s, one of the earliest spray can murals in the city (information taken from Acer One’s Instagram thread).

I found these bunnies quite a while back, but like to spread out my posts of Nevergiveup’s (Eldey’s) work otherwise you might get overwhelmed with cuddly rabbits and that simply wouldn’t do.

This pair of rather cool rabbits reside in the tunnel under Temple Meads station alongside a whole world of hidden and rather forgotten burners and throw ups. Unfortunately the taggers got to these rabbits long before I did, although I have a feeling I have some older pictures that might be cleaner in my archives – finding them would be troublesome though.

Looking like a comedy double act – Cannon and Ball or Little and Large spring to mind, these charming characters add a bit of fun to our ordinary lives. 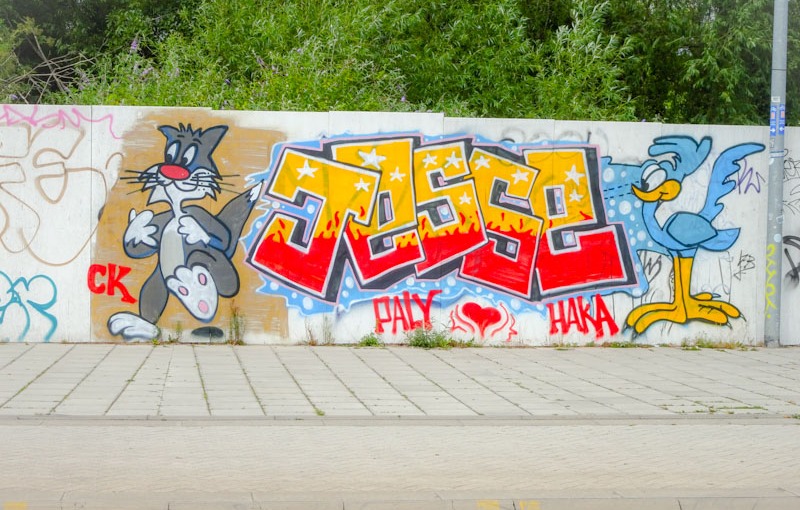 Adjacent to the new hoardings on Cattle Market Road that have been immaculately painted by Josh B, Bnie, The Hass, Hazard and Sled One are some slightly older hoardings which are beginning to be ‘decorated’, this one by Haka

Haka’s work is a little more edgy than his neighbours and has a real sense of vandalism about it compared to their high-end work. All of this wonderfully illustrates exactly why I love street/graffiti art… the vast spectrum of styles, ‘respectability’, talent on offer caters for pretty much every taste. This character-writing combination is a cheerful piece with Tom and the Roadrunner flanking a nicely written JESSE. A fun piece.

This is the fifth and final piece from the magnificent outdoor gallery in Cattle Market Road arranged by The Hass. it is by an artist I’ve not come across before, which should not come as too much as a surprise because he is a tattoo artist called Josh B.

It is immediately clear that this is the work of a tattoo artist, particularly looking at the bird, flowers and hand on the left. I can’t put my finger on why the tattoo style comes across so strongly, maybe the way the spray paint is used in the way that ink is, I don’t know. The piece is really beautifully painted and it is great to see the Bristol reference in the shape of the Bristol suspension bridge in one of the framed pictures. A lovely piece.

There aren’t really the words to describe how good this bull piece by The Hass is. The trip down to Cattle Market Road would be worth it for this piece alone. The bull, so the story goes, escaped from the cattle market (we are talking some years ago) and terrorised the locals until it was captured.

The Hass coordinated the gathering of five artists to decorate the hoarding around the development site at the back of Temple Meads station, and I have to say the collection is one of the highlights of the year so far, and this piece is the highlight of the highlights.

The composition and colours are utterly stunning and contrast so amazingly with the blue sky and piles of rubble behind the hoarding. I think that the buildings represent the old Post Office sorting office that was knocked down to create this brownfield development opportunity. The bull looks a little bit more like a Spanish bull rather than a British one, but I’ll forgive The Hass for that.

I don’t want to go overboard on a description, but rather just leave you to enjoy and study the piece for yourself. Magnificent. 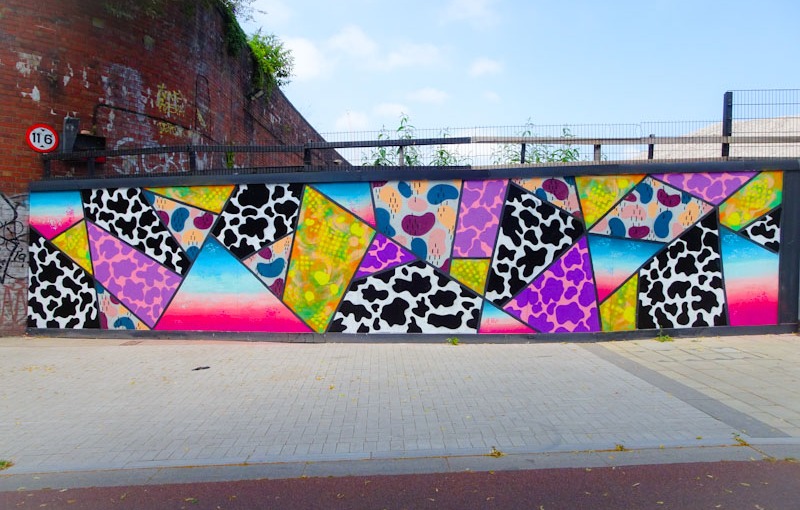 A new piece from Bnie and something really quite different from her. Bnie is an artist that I love, particularly for the fills she uses in her letters. Well, in this large piece there are no letters, only fills on a geometrically divided background.

Five creative and beautifully consistent patterns have been cleverly distributed along the length of the hoarding and there is an oblique reference to cows (Cattle Market Road) in the black and white cow-print pattern. This is a fine piece and sits comfortably with the other artists in this magnificent outdoor gallery. 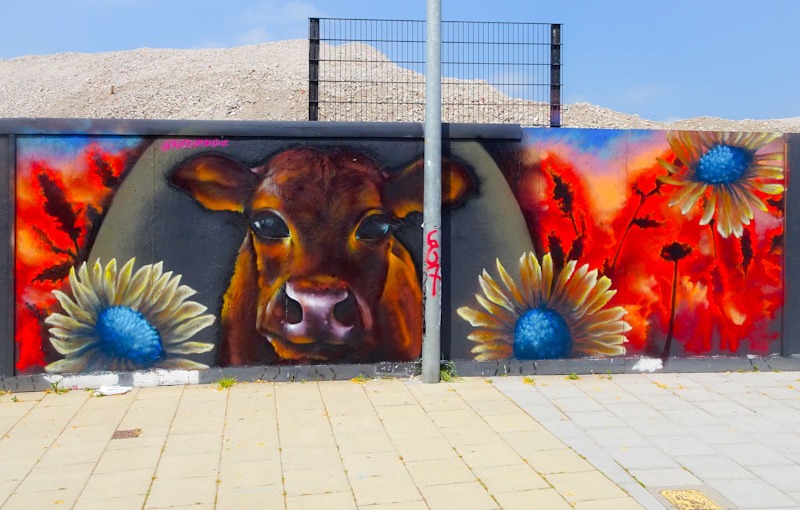 This is the second outstanding piece from a gathering of great street artists a week or two back orchestrated by The Hass. On Cattle Market Road, a theme has emerged on some of the pieces, involving a cow/cattle, the first one by Sled One that I posted yesterday.

This beauty is of course by Hazard and it really is an absolute stunner. Hazard talked about this a little in her Instagram feed saying that the vibrant red colours were chosen to reflect the sizzling lay hot day on which the piece was painted. The cow is magnificent, but it is the whole composition that screams out Hazard, with the amazing flowers and soft touch she creates with her spraying.

I hope that these hoardings remains intact for a while and that the taggers keep clear, because here we have a great showcase of Bristol talent.