I am being a little bit lazy this week and have selected some doors that cross over into my street art posts. I make no apologies…I am a busy man and some weeks I just don’t have the wherewithal to take door pictures.

I would say however that the first door (which was originally going to be the only door for this week) is one of my all time favourite doors, so it deserves a special post really. I will soon be posting it again as part of my street art thread.

The other doors have been lurking in my Thursday doors folder for far too long and need to come up for air. Incidentally Coming up for Air by George Orwell is one of my top ten novels…well worth a go if you’ve not read it.

The bear by Stewy might trigger some memories of the squirrel I posted a few weeks back by the same artist.

Well that’s it for this week. I hope I can get out and find some new doors next week TTFN.

At the far east end of North Street, Bristol, is the colourful Steam Crane pub, which during Upfest plays host to several walls in its beer garden/back yard. There is a little side passage just to the right of the pub which leads you directly into the yard, and the wall on the right is always crammed with great street art.

On entering into the yard, the far left-hand wall is also given over to a large piece for Upfest. Along the back brick wall however, there is no street art, except for this cheeky little red squirrel by Bristol’s Stewy, whose stencils can be found all over the city.

The door is plain, but the whole scene – the grey timbered facade, white door and squirrel – seem to come together in a pleasing way.

The squirrel is a stencil that Stewy has used many times about the place but it doesn’t matter how many times you see it, it always charms.

Here are some Upfest pieces from the walls of The Steam Crane:

I think that Stewy owns this wall. The Bristol-based stencil artist has had one of his pieces on this little wall in North Street for at least three years now. The ram is a fine successor to the Bristol Pounds £5 that was there before.

I am and will continue to be a keen supporter of Stewy’s work, which is a cool mix of celebrity work and wildlife stencils. This was not his only stencil at this year’s Festival, and I’ll save one of his others for a future post. Let’s hear it for this extremely intricate single-layer stencil of a ram…

There is a small wall on North Street that Stewy seems to have made his own. Back in July 2016 he had a fabulous stencil of the great musician Robert Wyatt on this wall, which was a particular favourite of mine, because I like his music.

This beautiful stencil, sprayed around the time of last year’s Upfest is a reproduction of a Bristol Pounds five pound note (yes we have our own currency here in Bristol) which depicts a number of Bristol heroes including Isembard Kingdom Brunel, DJ Derek and Robert Wyatt. To get a decent look at it you need to look at it sideways.

Anthony Wedgwood Benn, or Tony Benn, will be forever remembered as the Bristol South East Labour MP who ruffled the feathers of the establishment with his hard left wing views. An adopted son of Bristol and much loved MP. This is a lovely tribute to Tony Benn by Stewy.

I think I a several years late in posting this fabulous stencil, and it has faded a little over time, but I have only just discovered it, and felt it write to post it as soon as I was able. Stewy has a great track record of creating stencils of important popular figures from Bristol, some of which are recorded previously in the blog. I like his work very much, and this particular piece feels so very right. 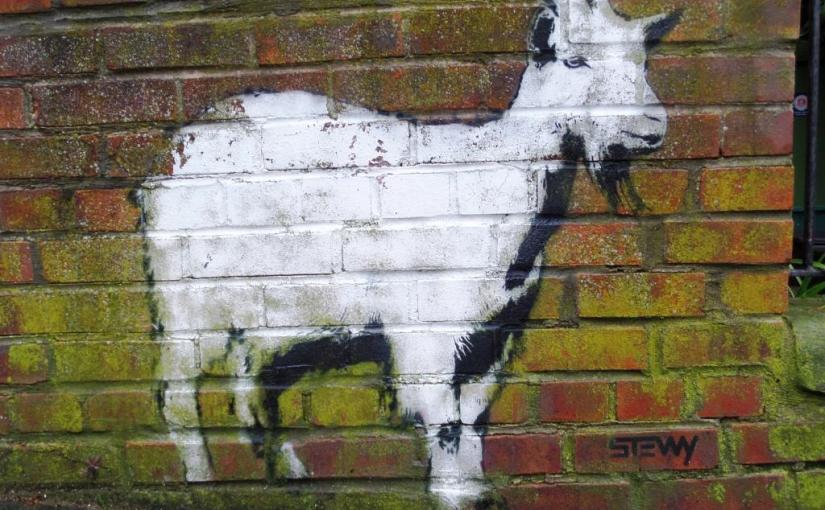 I was actually looking for something else when I found this goat stencil by Stewy. I have known about it for sometime, but had no idea where it was. Finding it was the reward for my curiosity in seeking out some graffiti nearby.

Stewy has produced some wonderful stencils around the city, including this Robert Wyatt piece posted last year. Animals and well known people are the areas Stewy specialises in and his stencils are distinctive in that they are nearly all two tone.

When I first photographed the goat, the sun played havoc, with half the goat in sun and half in shade. I tried making a shadow with my body, but it looked, frankly, a bit crap, so these pictures are a second attempt ion a flat-light day, and not great pictures either.

This is an absolute gem recently stenciled on a rather obliging white wall by one of Bristol’s finest street artists, Stewy. What make this piece extra special for me is that it is a picture of one of my favourite musicians, Robert Wyatt, whose version of ‘ship building’ is in my top ten personal hit list.

Stewy, when he is not stenciling animals, is creating images of well known people. Other works I have posted on include Cary Grant and DJ Derek. I love his work and was really excited to come across this one. I knew he had done it, but just didn’t know where. I expect It’ll get loads of attention at Upfest 2016.