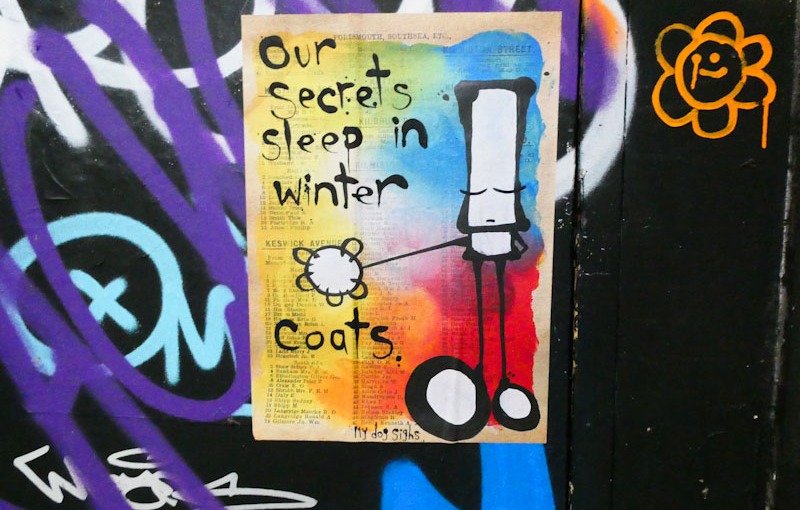 When artists come to Bristol for Upfest, they occasionally leave behind some ‘extras’, and this is exactly what My Dog Sighs did in a couple of spots around Bristol with these wheatpastes. In Bristol, wheatpastes have never been all that popular, which is a pity, so to see these superb paste ups from such a significant artist is a real joy.

The first paste up features MDS’ Everyman character painted on a newspaper background, with the profound statement ‘our secrets sleep in winter coats’. Although this looks like an original artwork, it is in fact a print, which in no way devalues it(except in monetary terms), as many wheatpastes are prints that are replicated in multiple venues.

The other two prints feature rather more subtle characters, more akin to the artwork he has been developing from his crushed can pieces. At one time MDS might have been in danger of becoming a one trick pony, however he has spread his wings and diversified so much in recent years which is great to see.

I think these three were in Leonard Lane, but I can’t be one hundred percent sure as I took photographs of his wheatpastes in several different places. The final piece has one of his pigeon-people that MDS has been painting for two or three years. Fabulous stuff. You will always find me partial to a bit of paste up work. 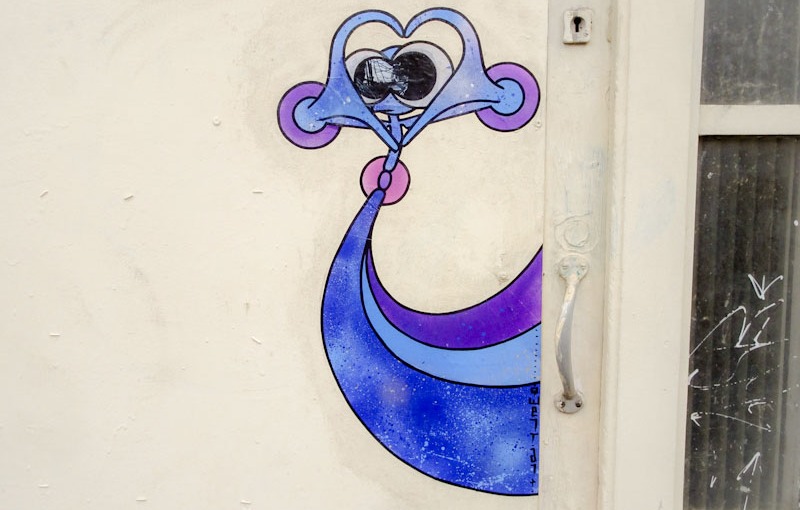 My love for wheatpastes is a theme that runs through my posts on Natural Adventures, but sadly, there is not much of a paste-up culture in Bristol, and I think, perhaps counterintuitively, that it is less tolerated by the authorities than spray-painting. It is good therefore, that from time to time visiting wheatpasters visit the city and pop up a few decorations for us to enjoy, like this one from qWeRT.

If you like what you see here, it might be worth a quick look at the qWeRT gallery I put together some time ago, but have updated just now. qWeRT has used the rather tatty door as a perfect spot for the bug-eyed character to express its love, a great sentiment that we could all do with plenty of.

Paste ups tend to be few and far between in Bristol, and there is nothing like the culture of wheatpastes here as there is in Shoreditch, for example. I suppose that their rarity makes them extra special, and when qWeRT visits the city, it is always refreshing to see his goggle-eyed characters.

This one in North Street is immediately above a Stewy stencil of a sheep, and is perfectly positioned under the coping stone of the wall. Although looking a little worse for wear, this piece isn’t actually all that old and is one of several that appeared in the North Street area a couple of months back. Creative and fun, qWeRT will always be welcome in  Bristol (as far as I am concerned).

A few years ago, it was the wheatpastes of Kid Crayon that fired up my curiosity about street art, but they are not common in Bristol, so whenever I find one it is always cause for celebration.

Mudra arrived in Bristol last year and immediately made an impact with several of his characteristic face pieces and writing. Now, if you hunt around in the Cumberland Basin you will find this beauty ‘data muncher’ which I very much hope is the first of many wheatpastes from him. Classy. 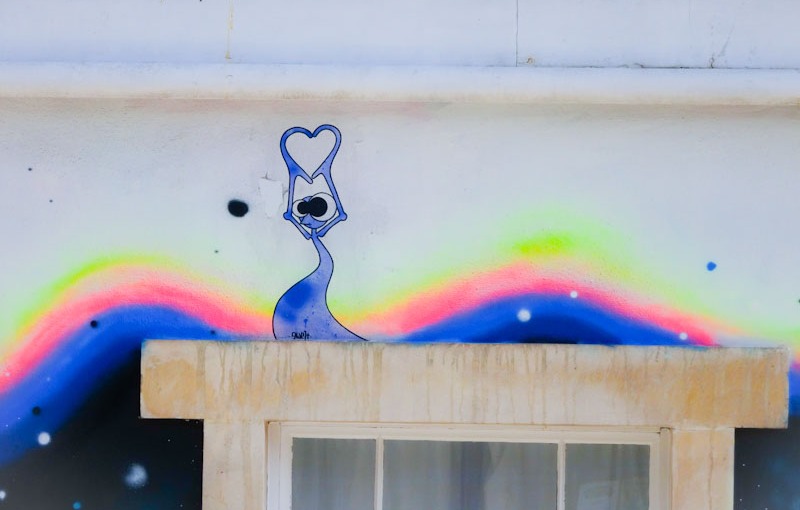 It is weird how easy it can be to completely miss things, I think the expression is something like ‘you can’t see for the looking’. I must have walked past this qWeRT piece dozens of times, but only noticed it recently.

The placement of the googly-eyed pasteup is absolutely perfect, blending in with a larger mural on the wall from Cheba. It all works so well together. I have always said that half the skill of wheatpasters is their ability to find just the right spot. Get that wrong and the impact can be diluted, get it right and it is amplified. Love this one. 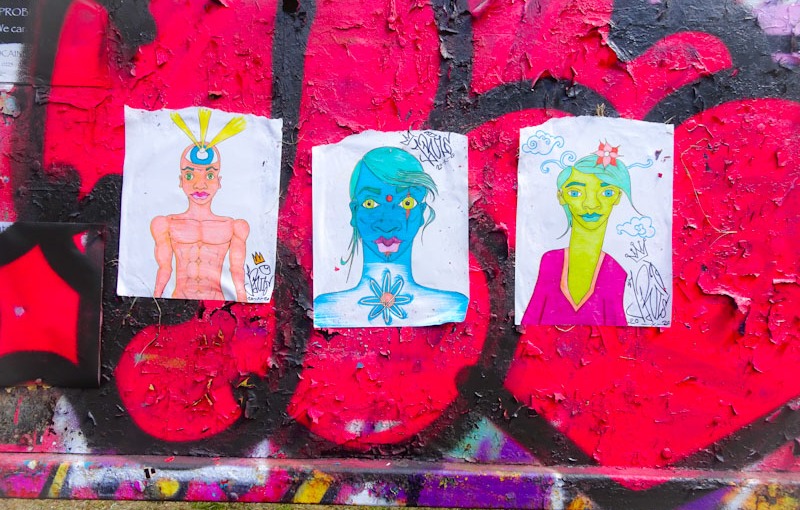 A second post of wheatpastes by Jarvis only this time there are three individual paste ups for the price of one. I posted a piece by this artist about a week ago, knowing nothing about him, but a rapid comment from theartblogger54 confirmed the artist’s name and even shared his Instagram account.

As far as I can make out, Jarvis appears to live in Bristol and I think probably in Easton, which would explain the location of these paste ups. On the left hand side of the triptych is a bare chested male figure with an interesting six-pack on display and an all-seeing third eye.

In the middle is a blue face with some kind of atomic structure in the neck area. It is a decent coloured sketch amplified by being one of three posted on the M32 roundabout notice board.

On the right is the third figure with a very long neck and a flower in his/her hair, and if I had to choose I would say that this drawing was the pick of the bunch. It would be great to see more of these sketches appearing about the place. This is what street art is all about, a spectrum of different styles, abilities and techniques which gives it such broad appeal and accessibility.

A gallery of wheatpastes from the brilliant and quirky London-based? artist qWeRT

All photographs by Scooj

I love making discoveries. Finding things that were meant to be found, but only by those who are looking. This drawing is one such discovery, in one of the tunnels of the M32 roundabout. There are a trio of other pieces by the same artist not far away. Regular readers will know that I am particularly fond of paste ups, and when they are by an artist unknown to me, they are that little bit more special.

I think the artist is called Jarvis, but that is as much as I know about them.  The crown on the top of the signature indicates to me that this artist understands street art culture and is deliberately being a part of it. The piece itself, roughly A4 size, is vibrant and striking. The colours and elements are simple and bold. A red figure in profile, the sea, the sun, the moon and a possible reference to Bristol, a hot air balloon. The wheatpaste is set on a jaunty angle and seems to have been torn from a pad at the top edge. I like this paste up very much and it feels like we might be seeing the emergence of another Bristol street artist. I’ll post the other three pieces soon, and will be on the lookout for more.

On Jamaica Street, opposite the PRSC outdoor gallery is this curious paste up by qWeRT. This is quite different from the googly-eyed character that we are used to seeing, and something of a rarity (unless I have mistaken the artist, which is always possible).

Looking a little bit more like something from Face the Strange, another wheatpaster, the piece is of a suited man with robotic extensions for a head and arms. I passed by that way yesterday and even though the piece is two years old it is still there. not too tatty either. An interesting paste up in a great spot.

I am not entirely certain when this lovely Egyptian-style wheatpaste by qWeRT first appeared, and by the time I photographed it it was already looking a little weathered, but I think it was from a visit to Bristol in around November/December last year.

Our googly-eyed Friend has really gone to town in this one wearing a full Tutankhamen death mask and looking most splendid. As much as the artwork itself, I like the placing, in a disused window space so that it is framed really nicely. To be fair, it is a popular space for wheatpasters, but that is because it is exactly the right kind of spot. I think a qWeRT gallery might be in the wings.