Yet another outstanding piece from the Poland v Spain paint jam at the end of May, although this one is by an artist who appears frequently on Natural Adventures, but you are more likely to know him for his charming Rabbits. It is of course Nevergiveup AKA #followmyrabbits AKA NGU AKA in this case Zbok. I expect he has several other personas from the past too.

The only way to desribe this piece of writing is utter class, I mean it really is outstandingly beautiful and crafted with such precision and care. This is from an artist who is immensely versatile and creative.

If you look carefully, you will see that the piece spells out ZBOK (which I think means ‘deviant’ in Polish). The smokey purple puffs are the cherry on this particularly sensational cake. 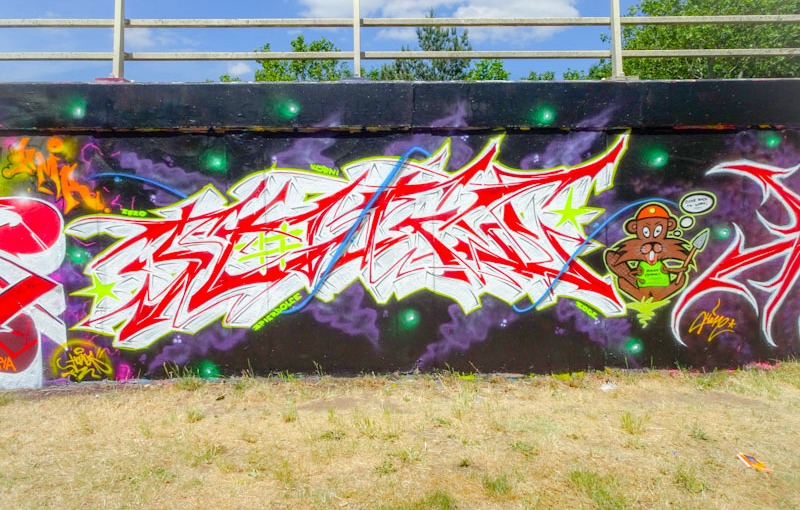 I told you that Soge has been busy, and this is yet another one of a fine collection painted in the last three weeks or so. You might notice that this one was painted as part of the Poland v Spain paint jam at the end of May, and once again incorporates his little beaver character which looks like it has become an established thing for the artist.

It was a privilege to be able to watch all the artists at work during the paint jam, and I managed to catch up with several of them and introduce myself to some for the first time, including Soge, who was painting next to Hire.

The piece of writing is really classy, and I particularly like the blue line that is coiled around the whole thing. What is also nice is that the beaver isn’t a throw-away gesture at a character, but a very nicely worked little thing that complements the writing without dominating is. A great, nicely balanced piece.

Whilst trying to report back on the big Poland v Spain paint jam on the M32 at the end of May, I am desperately trying to play catch up, because this entire wall has since been re-painted. I am now itching to post the new pieces, but must be patient and diligent. This piece is by Cort (Pad) and was painted next to friend and compatriot Laic217.