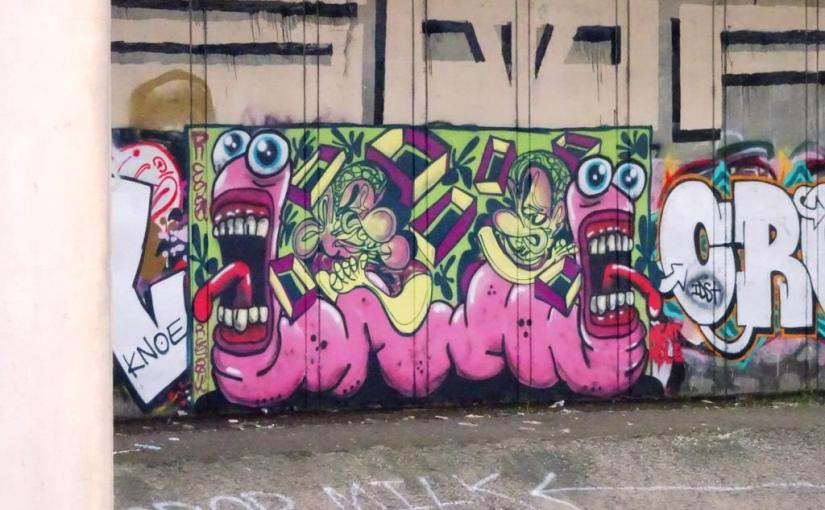 The M32 Spot is an interesting location. It is sited under an elevated section of the M32, the main artery into Bristol from the M4 motorway. There is a DIY skatepark which is used by skateboarders, predominantly when it is wet (a barrier to skating), but most of the time is fairly quiet. It is also a bit of a graffiti/street art hotspot.

In addition to the skatepark, there is a fenced-off area through which a concreted section of the River Frome is channelled via a culvert under the city and which eventually discharges into the New Cut. I have never quite worked out how to get over the fence to this section of concrete, unlike many graffiti/street artists who have plastered the walls with their work, so my pictures a limited to long-distance shots like this one through the fence railings.

It is a pity that this collaboration between Stupid Stupid Meathole and Panskaribas is so inaccessible, because it really deserves to be seen by more people than the very few who would bother to look here.

The piece features one of Stupid Stupid Meathole’s grotesque worms, this one with two heads, looking like it is being ridden by a couple of Panskaribas’s characters. The whole thing is badged as a Reseau collaboration, and it is possible that there is a third artist involved (the boxes) but I am not sure. I’ve yet to meet these artists, but it is only a matter of time I guess. What would we do without zoom lenses?