This piece from Laic217 was painted while I was away on my family summer holiday, but I was more than aware of its existence due to the fact that it was all over the Bristol Instagram feeds that I follow. Of course, on my return home, I made a beeline for the spot in Cumberland Basin.

There is something rather striking about the portrait piece, and I have a feeling the background pattern has a lot to do with it. The portrait itself is a classic piece of Laic217 art, disturbing and menacing, with the figure clan in a full mask and goggles. It has a dystopian future feel about it.

This is a lovely door piece in Dean Lane from Laic217 that I am sure will make it into a Thursday Doors post sometime in the future. Featuring a masked spray painter, it is a striking and nicely worked piece that fits the space perfectly.

This was the third in a quick-fire spate of Laic217 pieces, we may have to wait a short while for the next ones to come on line. In the meanwhile we can enjoy this fine work.

My heart always beats a little faster when I find a new Sepr piece, and this one, part of a full wall collaboration, is pure Sepr at his creative best. As with so many of the great Bristol character painters, it is often very difficult to know what is going on, but art I guess is partly the intention of the artist and partly the interpretation of the viewer.

The rather concerned character seems to be holding a mask with a happy face on it, so maybe this piece is about hiding our true feelings and emotions behind a happy facade. The soft touch and expert spray work from Sepr is epitomised by the shades of orange on the character’s shirt giving the material depth and texture. This is a tour de force from one of the very best in Bristol. 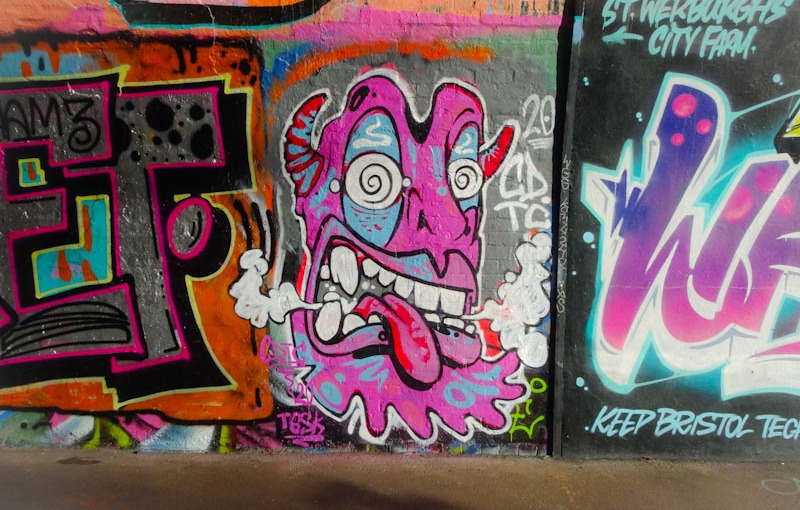 On a recent trip to St Werburghs tunnel it was so very nice to be greeted by this monster face piece from CD.TC. There has definitely been an uptick in the frequency with which CD.TC has been hitting the walls this year, unless I have been missing something in the past.

This was painted at the same time as a Daz Cat piece a few yards away and the two will often be found painting together. I haven’t yet had the pleasure of meeting either of them, but they are out so often, it is only a matter of time.

This particular piece by CD.TC is rather more elaborate than usual, and I am guessing he took a little more time over it. The addition of horns creates an even more terrifying character. There is sure an influence of tribal masks in his pieces. Nice work.

Readers of Natural Adventures will know that I am a monumental fan of the work of Laic217, and here is the latest collaboration with his often painting partner Cort in Dean Lane. I have to say though that this is not their best piece in my opinion. There is something not quite right about it. The two elements of the collaboration do not complement each other and I think these would be better as stand-alone pieces. Don’t get me wrong, this is still great work only not quite up to the usual high standard.

The central Cort writing is book-ended by two rather dark characters by Laic217. Although we are used to seeing Cort write CORT, he has also taken to writing PADY this year – I’m not sure what has prompted this variation, but writers often do this probably just to swicth it up a bit.

On the left side is a post-apocalyptic character with a skeletal face and mask. The mask could be interpreted as a gas mask or spraying mask and the two seem to intertwine. It all feels a bit chilling and like something out of a Terminator movie.

On the right of Cort’s writing is another character in  the same dark and depressing regalia wearing a full overhead gas mask. These two Laic217 characters speak of doom and convey a dystopian future in a chilling and convincing way. I would have liked to have seen these characters separated from Cort’s writing, which is at odds with them. 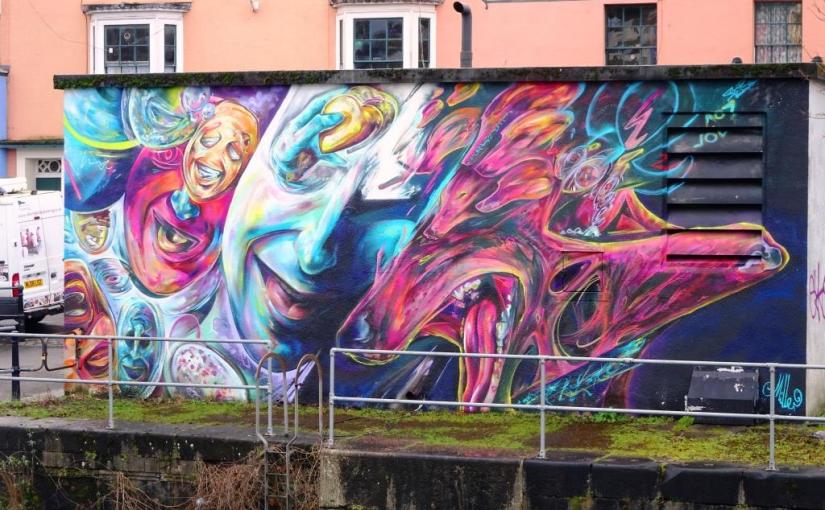 Anyone who can tell me what is going on here (other than the artist himself) deserves a medal, because it is wild and complex. Tom Miller has an exquisite touch and fertile imagination, a potent combination for creating vibrant and sometimes provocative street art.

Tom Miller left this piece unfinished for quite some time with a little note in the bottom right hand corner saying ‘work in progress’, but I have to say that the only difference I can make out between the unfinished and finished version is his signature.

The piece is in two very distinct and contrasting halves. On the left are several faces looking a bit like masks and typically distorted in a surreal way that Tom Miller does so well.

On the right hand side are two large intertwined and rather frightening dog heads and just above them a series of smaller ones. There is real threat and menace here which seems to be at odds with the unsuspecting mask faces to the left. A truly dream-like or even nightmarish piece from Tom Miller, executed with enormous skill. 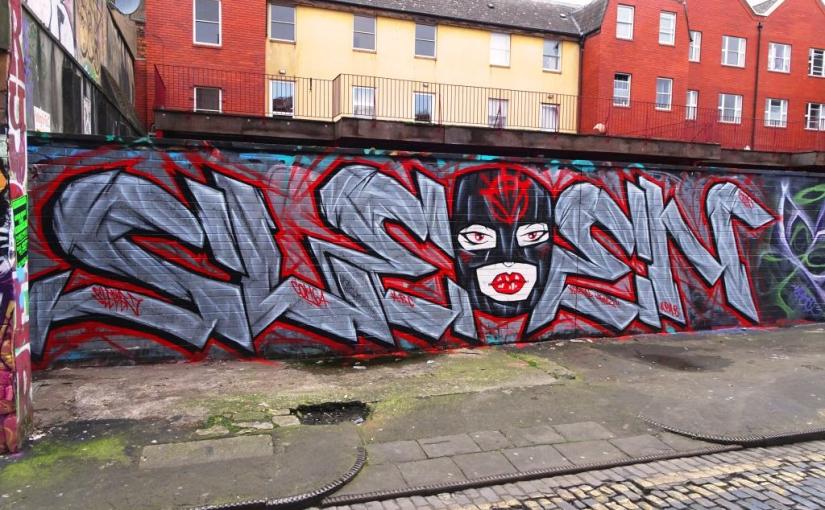 This is a fine piece of character writing, with the artist’s name interrupted by a girl in a facemask instead of the letter ‘V’. His style is somewhat different from some of the other writers here, who tend to work with much cleaner lines and solid fills, such as Cheo or Soker. Mr Sleven’s work is more organic perhaps, but is no less fantastic for it.

Showing off my ignorance, I’m not too sure what the icon on the woman’s mask is, but it sets the whole thing off nicely. Great to see something like this in Moon Street. 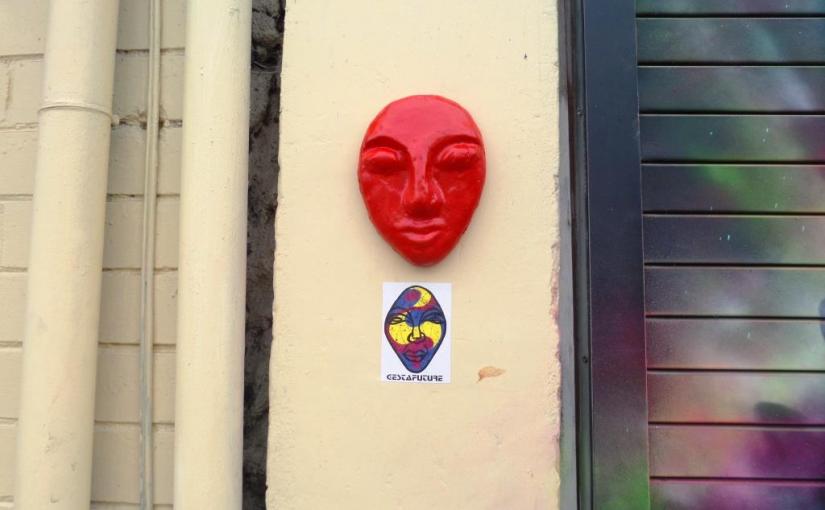 During Upfest 2016, a few of these beautiful glazed face masks by Gesta Future were placed around North Street and in town too, although from recollection none of them lasted too long before being hacked off, which is unfortunate if not a little predictable.

Gesta Future is an Italian artist who seems to be equally comfortable producing ceramics as he does using spray cans freestyle or with stencils. A versatile artist with great creative ideas. These masks are the only pieces of his that I have seen, but if I go to Italy any time soon, I’ll keep my eyes peeled. 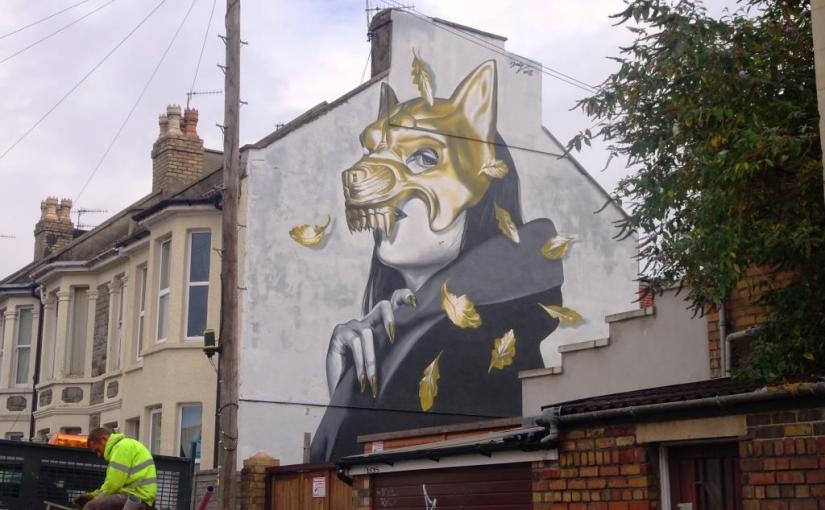 During the Upfest 2018 weekend, I really struggled with who was painting this piece. The difficulty was that it was on a new wall that didn’t really offer close access and the artist was perched high up on scaffolding. It turns out that the piece is by Bristol’s magnificent Jody.

Jody is meticulous with his work and certainly never rushes. For this reason, many visitors to Upfest never actually get to see his finished pieces, until they return some time later. It was days before he finished this one, but wow, it was well worth the wait.

This is a cleverly worked portrait of a woman behind a golden cat mask and it truly outstanding. Like so many of his works it seems to have gravitas…I can’t really express what I mean by that other than that there is a seriousness about the work. Beautiful piece beautifully executed.

I love this stunning piece by Mose78, and I think the guy with the beard seems to rather like it too. Mose78 started off as a graffiti writer in the mid 1990s and transitioned into street art, although he doesn’t restrict himself to the spray can.

I have taken a look on his website, and I wouldn’t say that this piece is all that typical of his work, which is actually really diverse. Having said that, I really like this one, there is something rather compelling about it. It would be great to see more work from this Birmingham-based artist.