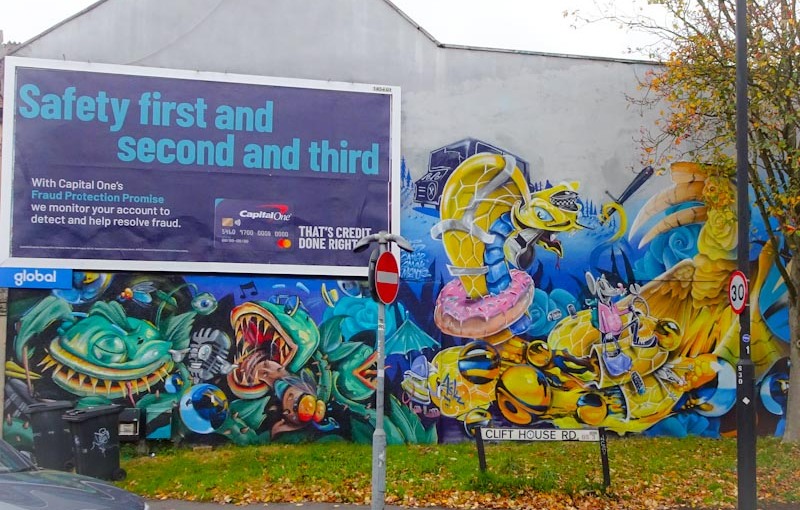 A recent epic collaborative piece on an ‘Upfest’ wall appeared without warning or fanfare a couple of weeks ago that brought together some fine atists, namely: Smak, Sled One, Ments and Curtis Hylton. What an utterly pleasant surprise and something of an improvement on the piece that adorned this wall before it.

On the left is a crazy but exquisite scene depicting venus flytraps feasting on various flying insects. In the middle is what looks a bit like an old microphone, although I’m not too sure if that is what it is. The story here… your guess is as good as mine.

Sled One has pulled together an equally bizarre piece that sems to be of a king cobra dressed as a policeman complete with truncheon and whistlewith an iced ring doughnut round its neck. The policeman woud appear to be in pursuit of a graffiti spraying mouse or two. Could this be a reference to some heavy handed policing which let to the prosecution of a street artist in St Werburghs tunnel recently?

To the right is a beautiful Hornbill by Curtis Hylton whose work usually involves a blend of stunning creatures composed of flowers, and he has worked miracles with this style here. Curtis Hylton has also embraced the colour scheme used by Sled One so that the two pieces merge into a true collaboration.

Dotted around the whole piece are a dozen or so ‘liquid’ spheres painted by Ments. It has been clear from recent pieces by Ments that he is working hard to create these solid/liquid forms and judging from his contribution to this collaboration this direction he is moving in is going really well. The whole collaboration is a celebration of bright creative ideas and utterly worth seeking out, although parking nearby is a bit of a challenge.