Dopes is an artist who appears to like spraying in tight little spots tucked away on the margins of popular graffiti spots, or maybe I just happen to find his pieces in such places.  This one is underneath the bridge in Sparke Evans Park, alongside a Maesyhook piece that until a week ago had been there forever (to make an appearance on Natural Adventures soon).

Set out in chrome on a turquoise background, Dopes spells out his name, with a rather curious character figure making up the ‘O’. A subtle splash of pink decoration and border gives the piece a little bit of zing and lifts it up above other chrome throw ups.

Teao One is one of the senior writers in Bristol, and by that I don’t mean he is old, but rather is one of those that has been writing for many years, even though he only crept into my radar last year (how did that happen?), which tells me I still have so much to learn and understand about this craft in Bristol.

There is something very distinctive about Teao One’s writing style, lots of well crafted letters in a uniform style, beautifully crisply finished. It took me a while, but the letters appear to spell out GENERAL, although I’m not too sure what that means or refers to. A banging chrome piece from a skilled writer.

At the back end of 2021 Daz Cat went through something of a purple patch, producing some of his best work to date, in my opinion. What is comforting to see is that he continues to paint his ‘bread and butter’ smaller cats all over the place of which this is a great example.

Nicely done in chrome on an existing red background, this throw-up cat brightens up the end of this ramp, and puts his stamp out there loud and clear. Plenty more smaller pieces from Daz Cat in the pipeline.

I was lucky enough to bump into Mr Draws just as he was prepping for this wall; it was a busy day for artists in the tunnel. I understand that Mr Draws has a good supply of chrome in his paint store and that is why several of his pieces of late have heavily featured chrome.

Mr Draws has been favouring these larger walls lately, and seems to be enjoying the freedom that they afford. The design of this piece is relatively straightforward and the fills and drips nicely done. In common with many of his recent pieces Mr Draws has included his horizontal bars, in red, to add interest to the piece. More great work from one of the nicest artists in Bristol. 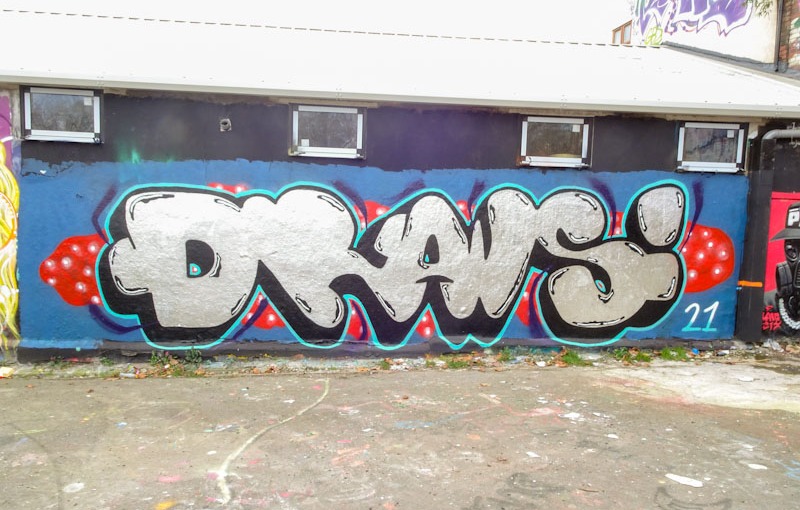 Back to one of our regulars today, Mr Draws, who is having to compete much harder to make it into Natural Adventures than he did a couple of years back, simply because of the quantity and quality of street art and graffiti that is appearing in Bristol at the moment. It is a strong field.

Notwithstanding this, Mr Draws has been ticking along very nicely and producing pieces with reasonable regularity. Recently he has been painting larger pieces on larger walls drawing out his letters. Always full of ideas and thinking of different ways to present his letters, Mr Draws is a central pillar of the Bristol scene.

There are so many artists in Bristol whose work has never appeared in Natural Adventures before. The reasons for this are complex, but are not related to a quality or standard that needs to be met, rather to a familiarity with the work and the ‘right time’ for me to embrace them in these pages.

The latest debutant is Krops whose work is all over Bristol, with this lovely chrome piece featuring a Mario Bros. Mario in the middle. Typically, Krops uses the letters/character combination to great effect usually with the character in the middle. I have plenty of his pieces in my archives and hope to share them with you in time.

Hot on the tail of his first piece on Natural Adventures, I am pleased to bring you this second one from last month. Of course, there are a whole ton of his pieces in my archives, but it will take me a little while to unearth them all.

Dopes seems to  favour these large letters with chrome or other bold solid fills and accent highlights and the overall effect is a good one. I know he takes care with his work, and it is clear to see from the sharp and clean lines that he is really conscientious about his work. Lots more to come.

Although I have photographed many pieces by Dopes over the years, I can’t recall ever posting any of them, which is a pity really, because he is a very skilled graffiti writer who has collaborated with other artists (largely from RAW) whose pieces have made it into Natural Adventures. Time to make amends.

While I was photographing this piece, Dopes was actually watching on, unbeknown to me, and eventually he self-disclosed that he was the artist and we struck up a conversation. He was fretting a bit over the colours and some of the detail and was wondering whether to come back and make some small adjustments. I love it that some writers are such perfectionists, for example Rusk is another, that they agonise over a piece even after they have finished it. The lettering in this chrome piece is nicely accompanied by the blue borders and gaps, and the pink dashes just set the piece off really well. More to come from Dopes, and a few forays into my archive are likely.

It is great to see that Eman is keeping himself very busy these days, and this is one of several recent pieces in the Cumberland Basin area. I think that Eman and I must be on the same time wavelength as I keep meeting him on my rounds, most recently this weekend just gone.

This piece is a writing/character combination is chrome with a blue and thin yellow border. The character is something that Eman is developing and concentrating on and seems to be a direction of travel he is enjoying. This is the first of several new pieces I will be posting from the artist, and is an excellent start. 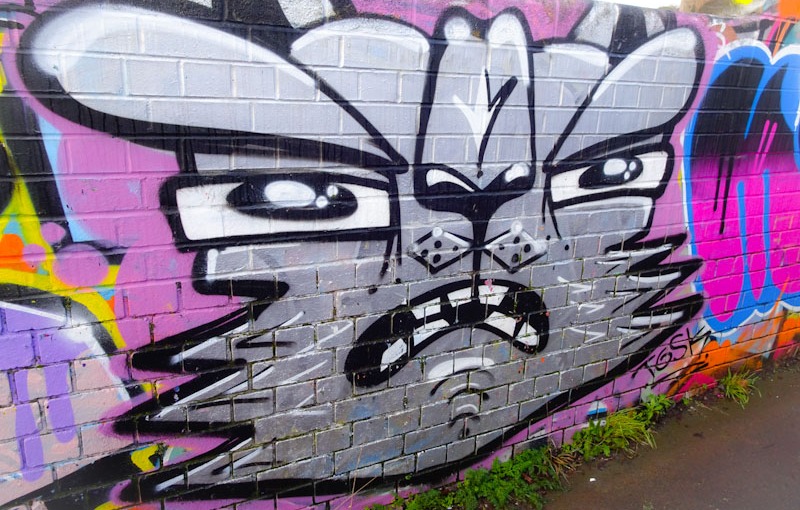 There is a little pathway close to the entrance of St Werburghs tunnel that leads up to a small nature reserve bounded by railway lines. The reserve is on the top of a hill and has some lovely views of Bristol and some interesting perspectives of the main lines coming into Bristol Temple Meads station. Of course, where you have railways and hills, you also have bridges, and where you have railway bridges there is a chance you might get some graffiti. That is the case here.

This is a rather unhappy, even angry, looking cat from Daz Cat. I think I prefer his happier cats. This one is mostly chrome and stands out amongst the other graffiti writing and throw ups around it. Worth the detour, and a nice peaceful oasis in North Bristol.