I don’t often go to this part of Montpelier, but I had been to the Italian delicatessen in Picton Street a couple of weeks ago and decided to go a little wander. I was rewarded by finding this very recently completed mural by Alex Lucas, and what a beauty it is.

I think that this wall was very much off the radar in the street art community, as the first I saw of it on social media, was a few days later from Alex Lucas herself, which made me think that I must have been there very shortly after completion and scaffolding removal. This is a classic piece of Lucas artwork, with a fabulous design of two birds with a floral accompaniment. This is truly magnificent stuff. It won’t be long before every building in Montpelier will be adorned with one of her works.

Since lock down measures were eased At the end of May, 3Dom and Sepr have collaborated on several occasions and are absolutely smashing it with each new wall they paint. This wall opposite the Star and Garter marks the Black Lives Matter campaign in two very different ways.

3Dom has opted for a big bold statement “Unity is Power” set on a red and orange background which gives the whole thing a kind of explosive impact. The large letters have shading that has a central vanishing point so the whole thing looks like it is heading straight for us. Nicely done, and unusual writing from 3Dom.

Contrast that with Sepr’s birds. His piece tells us a complete story in the simplest way possible. The three birds are identical in every way except their colouring and they are proudly marching hand in hand. This is an exceptional piece which deserves as much exposure as it can get. Poignant and relevant and not preachy.

disturbed while feeding their young

A pair of robins

make a home in the greenhouse

My ears deceived me?

I swear I heard the shrill cries 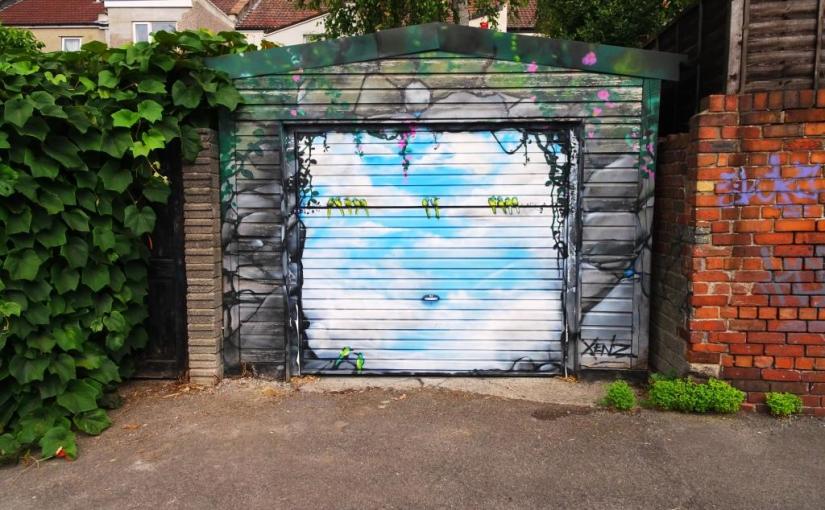 Following my post of a fabulous Xenz piece in Shoreditch a few days ago, I was reminded about this old one on a garage door in Devon Road, Bristol. I had to trawl through my archives and was thrilled to find it… a task that might sound simpler than it is.

This is a simple piece, perfect for the garage, lifting it out of the bland and ordinary to become a thing of beauty as well as practicality. If only more of the carbuncles and eyesores of our city could be similarly transformed. There is a strong sense of calm in this painting and a connection with nature that I find uplifting. The bee eaters are beautiful too.

I don’t think I can ever recall being disappointed with a Sepr piece in the few years that I have been enjoying street art. His distinctive cartoon style and sense of fun ooze from his works which usually raise a smile.

In this piece, marking the end of 2018, we see a sunbather being mildly abused by some birds (gulls?). One is stealing his ring, another emptying cream on his tummy, another drinking his cocktail and the last using a magnifying glass to burn his toes. Now when I first saw this, I thought someone had drawn a cock and balls on the man’s stomach, but the more I have looked at it, the more I think it is a sketch drawn by the bird with the tube of sun cream. A brilliant piece – comedy on a hoarding. Nice to see that Sepr and Epok have decorated the nearby wheely bin too.

my attention is drawn to

a bush filled with birds

more sparrows than I can count

clustered in a tiny space.