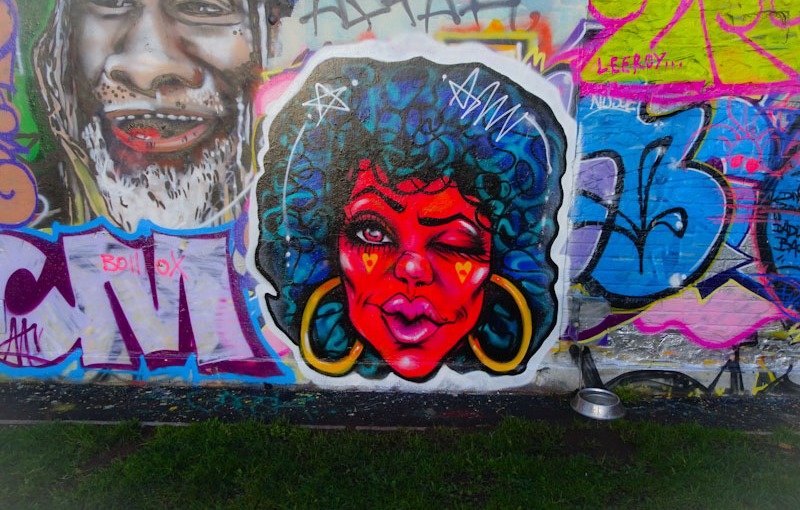 A really unusual, and if I might say slightly scary, portrait piece from Rosalita Raw on the side wall of the Star and Garter in St Paul’s. Why is it that carnival imagery, which is supposed to be bright, happy and entertaining so easily drifts into the dark and edgy?

Rosalita has had an exceptional six months or so, and I am loving every second of this upsurge in activity from her. This piece is really nicely worked, and shares some similarities with Pekoe’s style although a little bit more detailed in the facial features. Who is she winking at? Is it a knowing wink or an affectionate wink? Unusual and compelling. 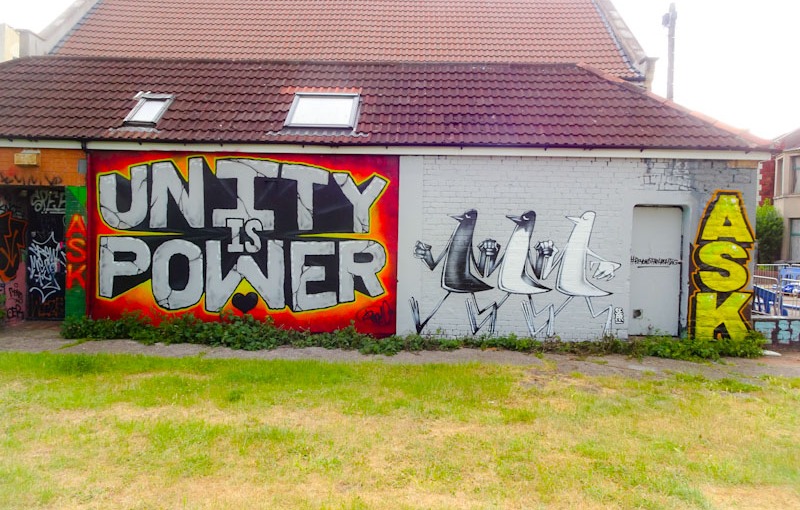 Since lock down measures were eased At the end of May, 3Dom and Sepr have collaborated on several occasions and are absolutely smashing it with each new wall they paint. This wall opposite the Star and Garter marks the Black Lives Matter campaign in two very different ways.

3Dom has opted for a big bold statement “Unity is Power” set on a red and orange background which gives the whole thing a kind of explosive impact. The large letters have shading that has a central vanishing point so the whole thing looks like it is heading straight for us. Nicely done, and unusual writing from 3Dom. 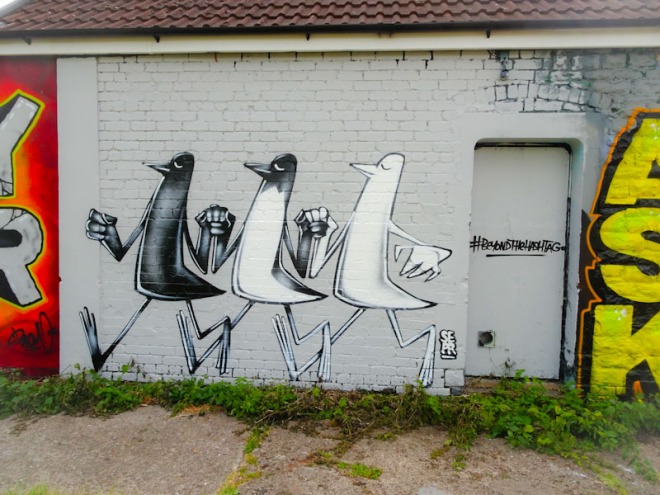 Contrast that with Sepr’s birds. His piece tells us a complete story in the simplest way possible. The three birds are identical in every way except their colouring and they are proudly marching hand in hand. This is an exceptional piece which deserves as much exposure as it can get. Poignant and relevant and not preachy. 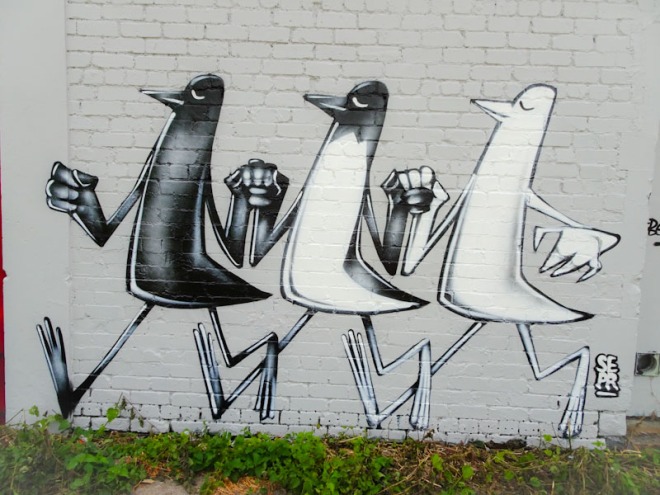 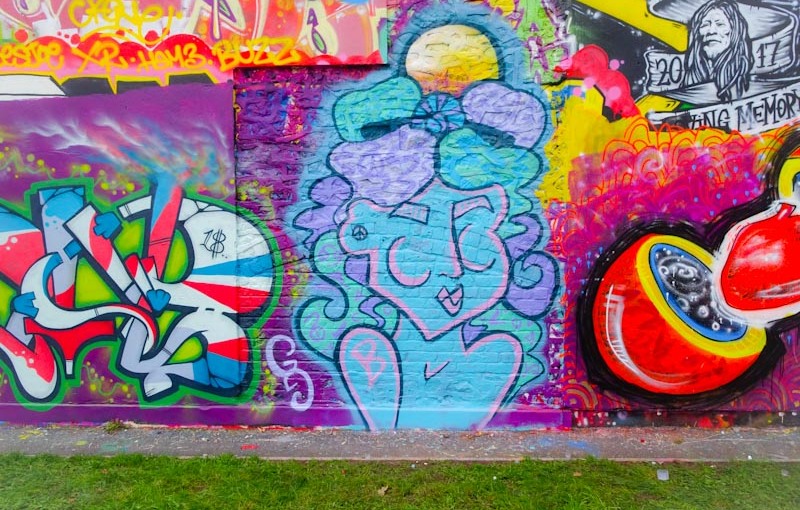 When I find pieces by Tasha Bee in my archive it only reinforces my sadness that it has been quite some while since I last saw a new piece by her. She has been busy with other projects, but I hope her absence from the street art scene is only temporary.

This piece on the wall of the Star and Garter from November 2018 is truly beautiful. Her style is instantly recognisable and often solemn, although there is the slightest hint of cheekyness in this girls face – or is that just me? Great colours and so typically Tasha Bee. 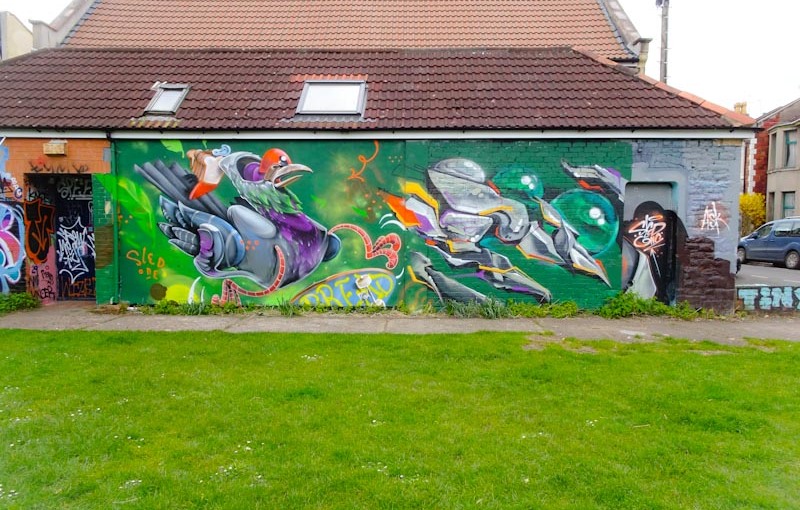 Strictly speaking, this is not the Star and Garter but the building opposite it, but it is in the general area. This wonderful collaboration was completed shortly before the lock down and is between painting partners Sled One and Ments.

On the left is a beautifully sprayed pigeon in a style that you would instantly associate with Sled One. The bread thing going on? I’m not sure but it could be a pun on pigeon toast instead of pigeon post, but it might be something else altogether.

Sled One pieces are often quite mysterious and although there is pretty much always a story going on, understanding it can be tricky. The fabulous colours used and his technique of clever shading to create a 3D effect are of the highest quality in this piece.

Ments, whose work has always had an organic flavour to it, has been experimenting of late with a range of forms and textures, including spheres and metallic objects. This is a really unusual abstract piecem that looks slightly unfinished in the top left hand corner. I will be interested to watch where this new directtion for Ments will take us.

The tribute on this wall, to Dutty Ken by Haka, is most fitting and appropriate as it is painted on the side wall of the Star and Garter pub where Dutty Ken had been landlord and DJ since 1993 up until his sudden death in early 2017.

Although the portrait is not the truest likeness it conveys the fondness in which Dutty Ken was held, and if you look carefully you can see another tribute on the same wall. This wall was given the makeover in time for this year’s St Paul’s carnival. A touching piece from Haka. 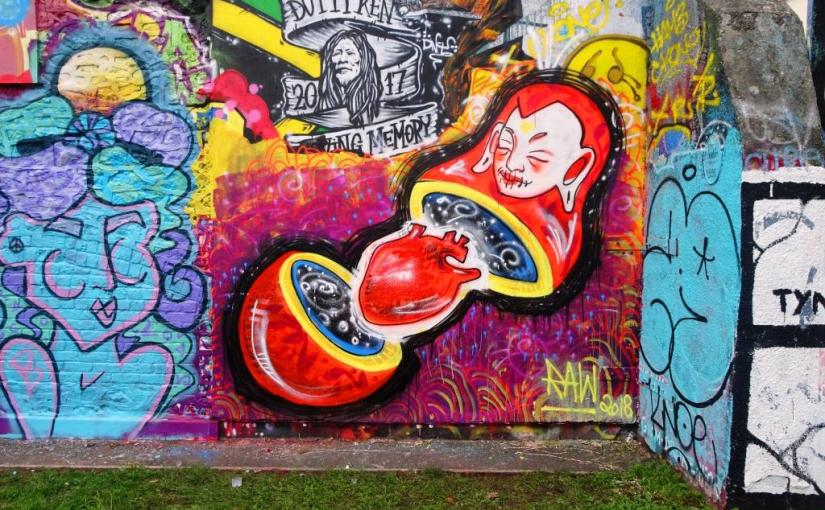 A new wall (for me) and a new artist (for me) is a rare and pleasurable thing in documenting the spectrum of opportunity and talent in Bristol’s street/graffiti art community. This unusual and interesting piece (there is a story unfolding here) is, I think, by Rosalita of PWA (Pirate Wall Art). The reason I believe this, is because Rosalita was tagged in an Instagram post by Soap (also PWA) who had been painting the wall on the same day and which I posted a few days ago.

I love the Russian doll idea and the two halves exposing a heart. The doll’s lips are stitched together suggesting some frustration perhaps. Like I said before, there is a story here…perhaps one of heartbreak. For sure though it is an unusual piece. 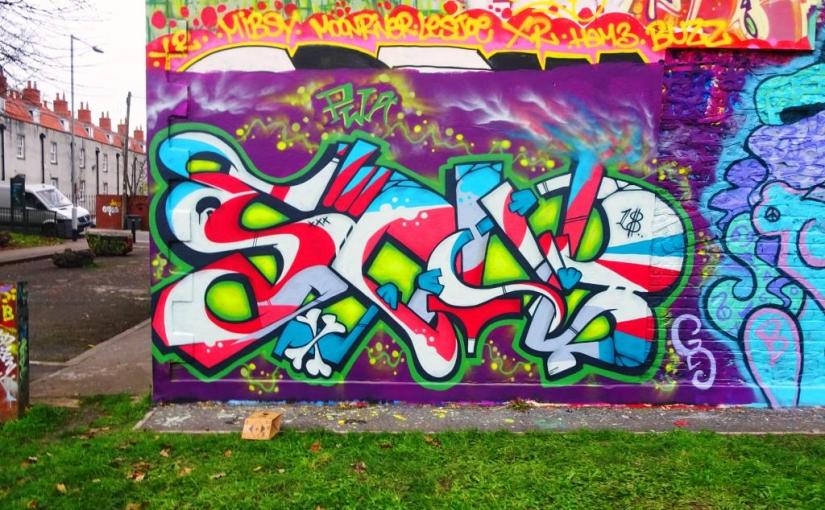 I have known this spot for a long while now, and have visited it a couple of times in the past, but there hasn’t been much that I have been able to get my teeth in to…that is until now. This is a really fabulous piece of writing from PWA’s Soap. Great design, vibrant colours and lovely crisp lines.

I particularly like the way the colours bleed out of the top right hand side in smokey clouds – a clever effect. PWA (Pirate Wall Art) have really been showing the way over the last six months or so, and are a dominant force in the Bristol street art scene. Great spot, great work from Soap.