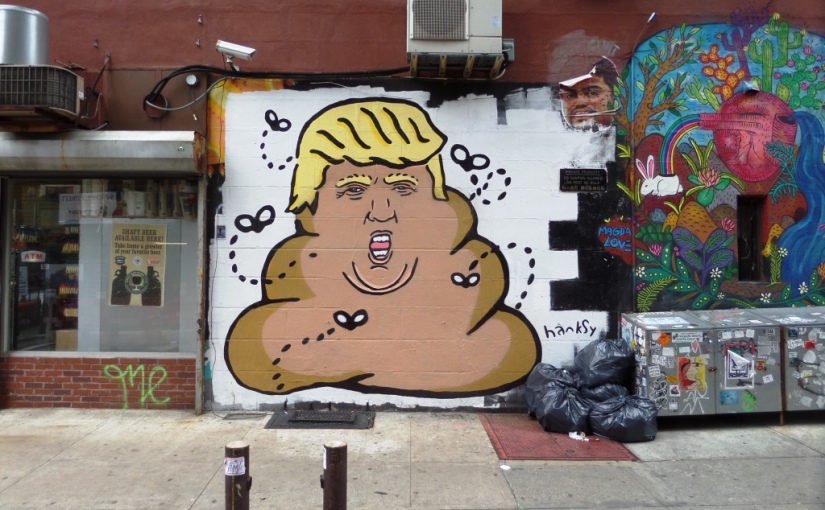 I was reminded about this satirical piece by Hanksy, because Donald Trump has just made a rather unwelcome visit to the UK to inspect his Trump Turnberry refurbished golf course in Scotland. He really is disliked here, and no senior politicians were there to meet him, but I guess they were all too preoccupied with Brexit. He congratulated the Scottish people for leaving the EU, but clearly didn’t understand that The Scottish voted to remain. He really is so thick.

Hanksy is a New York street artist who seems to use parody and satire in his work, even the name is playful. He is famous enough to have his own Wikipedia page if you want to know more.  While I was photographing the piece, a lovely local lady started chatting to me and my daughter. She said straight away that nobody likes Trump. That may be the case in NYC but he seems popular elsewhere.

This piece went viral globally, and has much in common with the Paintsmiths piece in Stokes Croft with Trump and Boris kissing. The first part of the nightmare is coming to pass, with David Cameron standing down and Johnson in the running for Prime Minister, the prophetic images may become a reality. I really hope that the USA comes to its senses and doesn’t fall for the populist propaganda aimed at the disadvantaged/disowned working classes. In the UK our citizens were duped by right wing fabrications about immigration and jobs and promises that the money diverted to the EU would all be spent on the health service – a promise already retracted within hours of a Brexit victory. So it was not a promise, but a lie.

The UK is in for a very uncomfortable ride in the years to come and I expect a lot of political graffiti/street art to emerge…which at this moment is the only positive thing I can cling on to. 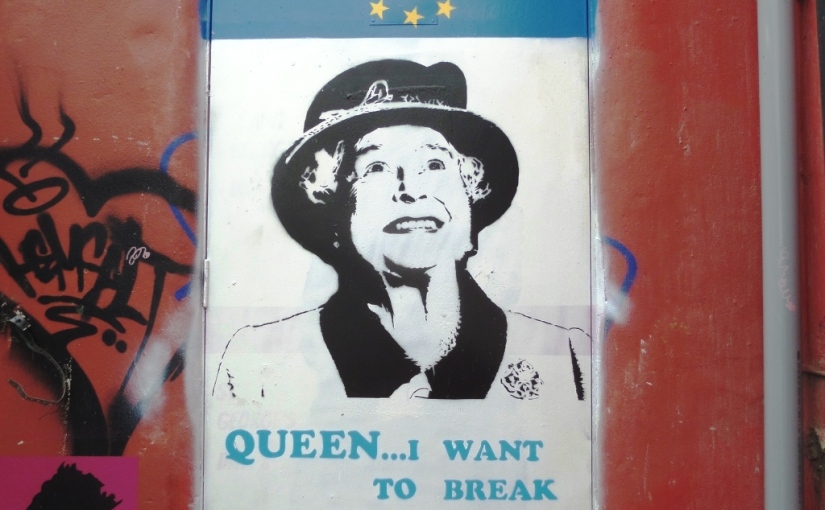 John D’oh is a very naughty political artist whose work I enjoy immensely, whether I agree with his assertions or not. Whenever I see his stuff I can’t help smiling at his cheeky nerve. I suspect it gets him into trouble occasionally, but I like the edge he brings to the Bristol street art scene. This time it is the turn of the Queen, a reference to the band of the same name and her position on Brexit as portrayed by some media outlets (in particular the Murdock News International Media group).

Not only is the content of his work noteworthy, but his execution using stencils and his profusion of work is impressive. I have a large backlog of his work, much of which is politically no longer contemporary, but nonetheless an indicator of political issues in 2010s Bristol.