What a pleasant surprise this little combination was a couple of weeks back on my routine scout around the M32 roundabout. Unannounced and unusual, this pairing of Ra and Vee is both welcome and refreshing. Neither artist has been on my radar before, but since seeing this, I note they have painted more pieces on Bristol and the West.

On the left hand utility box is a piece by Ra, whose name and artwork is obviously influenced by ancient Egyptian culture. The god Ra is normally depicted with the head of a falcon, and is male, so this piece is likely to be someone else. Stunning nonetheless.

The smaller utility box has been painted by Veee, and is a bright and cheerful face. The styles of the artists couldn’t be more different, and next to one another you’d never guess that this was a collaborative paint. It seems that these two routinely paint together. I wonder whether their styles ever meet.

This is the second recent piece from Tasha Bee that appeared at the other end of St Werburghs tunnel to her collaboration with Antikki. It is such a pleasure to see her painting again. Although she is really busy with her Pot Heads business, I hope that she finds time to splash a little paint at walls more often.

This is classic Tasha Bee. A stylised portrait with eyes shut, this time wearing a rather colourful and fetching cap. The criss-cross patterning on the cap I think is a technique she picked up from Soap a while back. Let’s hope this is not a one-off return to painting.

There is always something joyous about the work of Antikki, good karma perhaps, and this piece definitely has the feel-good factor about it. The poise of the two figures and the relationship between them is full of kindness and hope. Another feature of her work is the connection with nature, which comes across with the plants weaving in and out of the figures.

Antikki appears to like painting these concrete slabs up at Purdown, but the risk up there is that it is easy pickings for taggers who also seem to like this spot, at least the tags on this one haven’t affected it too much. I always get fired up by the optimism and goodness in Antikki’s work. Hoping for more before too long.

I drove past this about a week ago and pulled in to photograph it. The Merny (Morny) piece had slipped under the radar a bit, and I’m not too sure how long it had been there. No matter though as I am always delighted to see something new from him.

This one, along with many of his pieces, is a political piece that is critical of our current administration. Simply put ‘what a sad state of affairs’ more than adequately  presents the utter mess out country is in, not just in its appalling initial response to Covid-19 but also in its disregard for moral decision-making and corruption at the highest levels of government.  The Conservative way seems to be that as long as it makes money it makes sense, no appreciation of the consequences.

The ordinary man, maybe a cyclist or runner, is sitting to contemplate this mess. A wonderful human piece from one of my favourite Bristol artists. 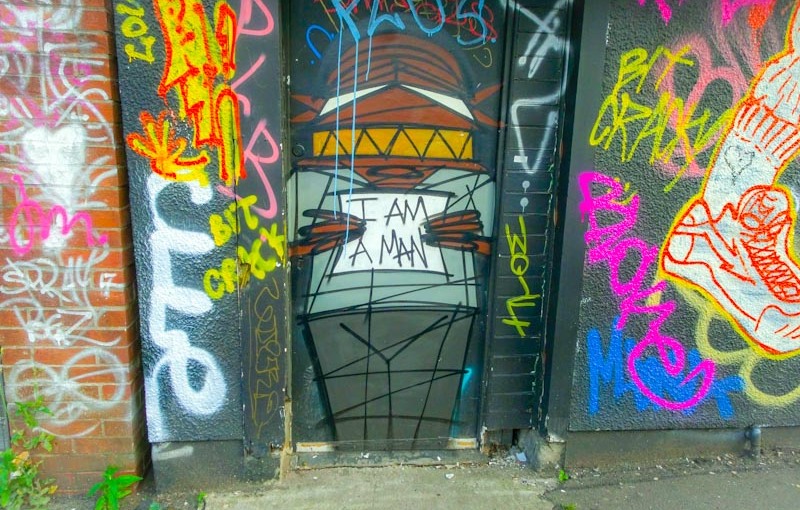 Tucked away in a doorway on Jamaica Street is the third of three recent pieces in Bristol by London-based artist Nathan Bowen. All three have been roughly the same size and in portrait orientation, which is quite unusual for street art, most of which is in landscape.

The scribbled cartoon character is holding a sign with the words ‘I am a Man’ on it. I don’t know what this piece might refer to nor whether it has any political significance but I really like it. I am a fan of Nathan Bowen’s unique style and would surely love to see him hitting the walls of Bristol more often. Pitu about the rather useless ‘plus’ tag in blue, but it goes with the territory.

This is another nice column piece from Skor85 under Brunel Way. I have always liked her work from the first time I saw it at a time when I thought she was a he… before I knew any better. To add to the fact that I like her work, I also really like her as a person, she is so full of energy and always seems pleased to see me, which can’t be said for everyone I know. One of life’s dynamos.

This column piece seems to be of a female monster figure representative of I don’t quite know what, but surely representative of something. There is a sadness about the piece and I am drawn into feeling sorry for the figure. So much from a small and modest piece. Love her work. 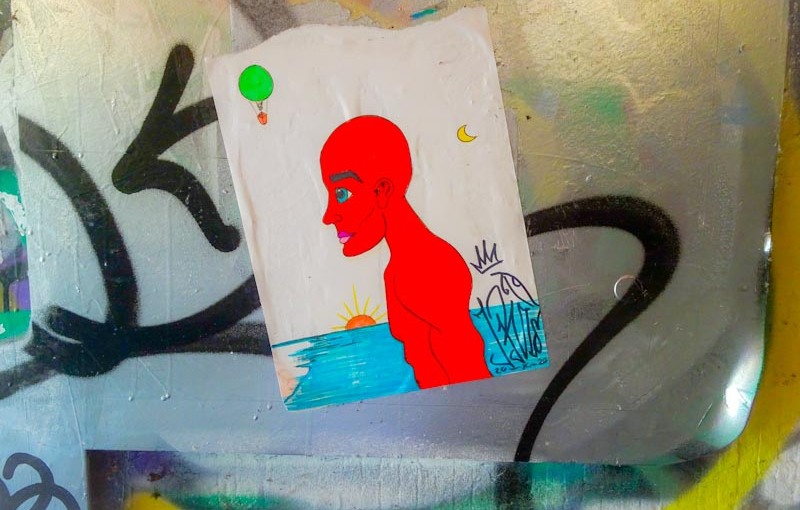 I love making discoveries. Finding things that were meant to be found, but only by those who are looking. This drawing is one such discovery, in one of the tunnels of the M32 roundabout. There are a trio of other pieces by the same artist not far away. Regular readers will know that I am particularly fond of paste ups, and when they are by an artist unknown to me, they are that little bit more special.

I think the artist is called Jarvis, but that is as much as I know about them.  The crown on the top of the signature indicates to me that this artist understands street art culture and is deliberately being a part of it. The piece itself, roughly A4 size, is vibrant and striking. The colours and elements are simple and bold. A red figure in profile, the sea, the sun, the moon and a possible reference to Bristol, a hot air balloon. The wheatpaste is set on a jaunty angle and seems to have been torn from a pad at the top edge. I like this paste up very much and it feels like we might be seeing the emergence of another Bristol street artist. I’ll post the other three pieces soon, and will be on the lookout for more.

The last of this sequence of five pieces from a trip to Shoreditch in November 2018 is this magnificent dorway work by Stik (who else). The simplicity of his work tells stories far greater than many more complex pieces and certainly backs up the saying ‘less is more’.

There is something very human about these two stick figures and although the only features they have are eyes, we understand what the piece is saying and for that alone it should be admired. Stik has hit upon a style that taps into our core senses and feelings at the most basic level and elicits emotions in ways that sophisticated pieces sometimes fail to do. I love this. 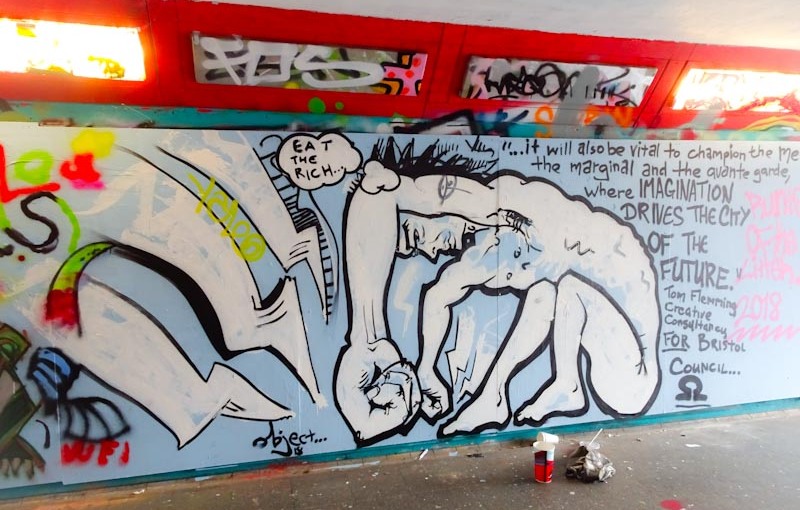 This prophetic piece by Object… in The Bearpit was a protest and exposure of Bristol City’s determination to shut down the space and clear it of all ‘undesirable’ activity and make it a safe, clinical space. Object… quotes from Tom Flemming a creative consultant for Bristol City Council:

“…it will also be vital to champion the messy, the marginal and the avante garde, where imagination drives the city of the future.”

The Council shut The Bearpit down, expelled the homeless people (some of whom I note have returned), removed skateboarding and buffed all the walls with anti-graffiti paint. The space is now sterile (and indeed safer), but street art and graffiti were not contributing to a lack of safety, but perceptions seemed to rule the Council decision making. A council, I would add, that celebrates its association with Banksy. Some muddled thinking here.

Object…’s piece once again features a contorted and strangely proportioned figure propping up the rights of the overlooked, the messy, marginal and avante garde mentioned above. He is a true champion and I salute him. 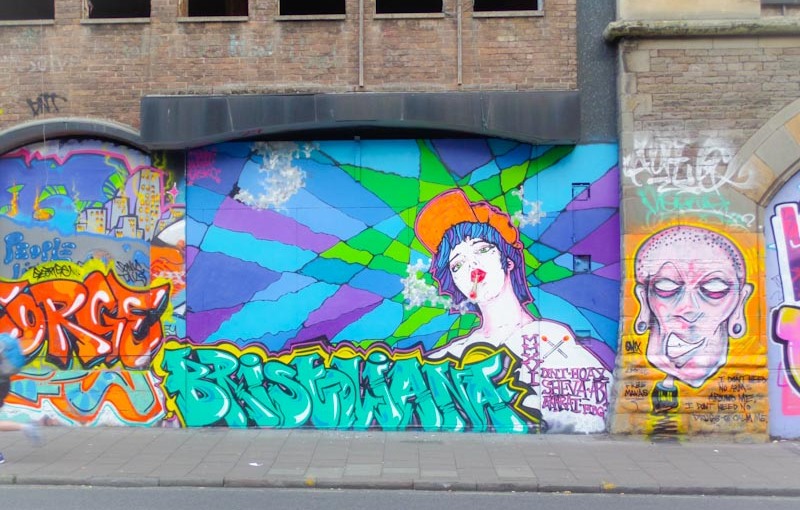 This is something of an iconic piece at The Carriageworks by DNT and Hoax, and possibly other collaborators. The wall can be dated as pre-2019 because it has been behind protective scaffolding due to the development of the site for a long time now.

The figure is by DNT and he has produced something similar since in Hepburn Road. I think that the beautiful patchwork background is by Hoax or maybe Sheva or maybe the whole thing is by DNT. This uncertainty might be the reason I never published these pictures before.

I think it is a beautiful piece and in some way really represents this area well. It is a great pity that this wonderful wall has been lost to street artists, but I guess it has ever been thus.