I drove past this about a week ago and pulled in to photograph it. The Merny (Morny) piece had slipped under the radar a bit, and I’m not too sure how long it had been there. No matter though as I am always delighted to see something new from him.

This one, along with many of his pieces, is a political piece that is critical of our current administration. Simply put ‘what a sad state of affairs’ more than adequately  presents the utter mess out country is in, not just in its appalling initial response to Covid-19 but also in its disregard for moral decision-making and corruption at the highest levels of government.  The Conservative way seems to be that as long as it makes money it makes sense, no appreciation of the consequences.

The ordinary man, maybe a cyclist or runner, is sitting to contemplate this mess. A wonderful human piece from one of my favourite Bristol artists.

It has been a very, very long time since I last saw a piece from Object… and at this time of political turmoil I have missed his interjections and commentary defending the less well off and downcast members of our society.

Another rather grotesque imagining of a hand being eaten by hungry mouths… a piece with a lot of pain anguish and rage. The whole scene is rather unpleasant and uncomfortable, but I think that is the point, this is a challenging and political piece. The slogan ‘Eat the Rich’ accompanies th work as in so much of Object…’s art. A provocative and compelling piece. 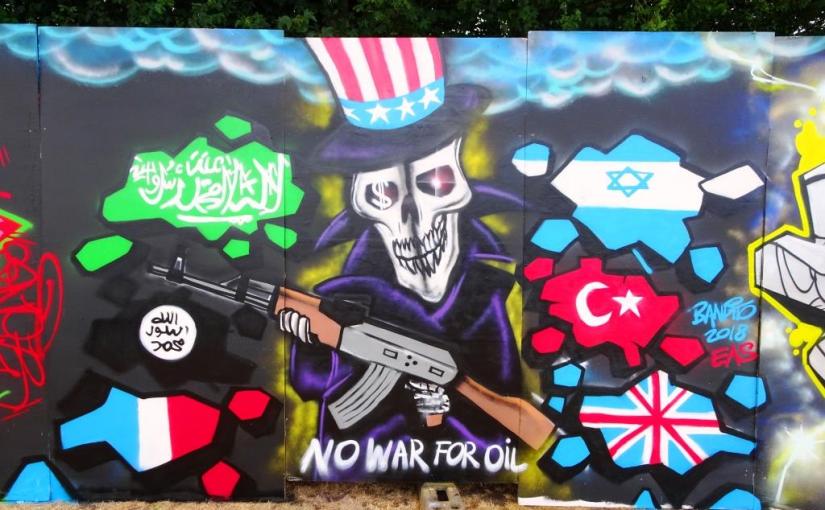 This is an interesting political piece by Bandito an artist I don’t know anything about but who has recently painted a piece in Bristol that I will have to dig out and post soon.

The work is a highly unusual one which slams home a message that wars should not be fought over oil. The flags of the USA, UK, Turkey, Israel, France and Iran, would indicate that the tensions lie here. Thought provoking. 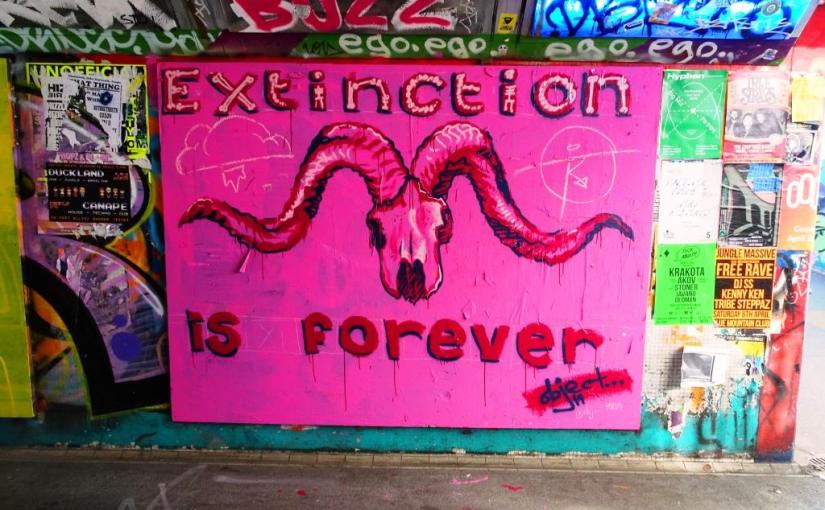 Here we have an artist doing what he does best. The passionate and politically active Object… is a champion of all that we should care about; homelessness, fair distribution of wealth and the environment.

This piece in The Bearpit is one of about twenty or so that appeared a week or two back to promote the movement ‘Extinction Rebellion‘. The movement is making three demands of the British government:

I have some sympathy with these demands, but worry that will not land well because of the astonishing mess of Brexit.

We have a divided nation, and broadly speaking environmental activism lands very badly with the Brexit narrative, and we have a Government dominated by the hard right whose interests are never shared with safeguarding the environment. Take for example the ex-Secretary of State for the Environment Owen Patterson who described the environmental movement (and indeed scientists and his own civil servants) as ‘the green blob’ – a derogatory term intended to belittle, mock and bully people who care about their environment, but his words chime for those who are comfortable or self-interested and wish to maintain a status quo (safe middle Britain).

I feel an essay coming on, but I have to make a chocolate panattone bread and butter pudding. 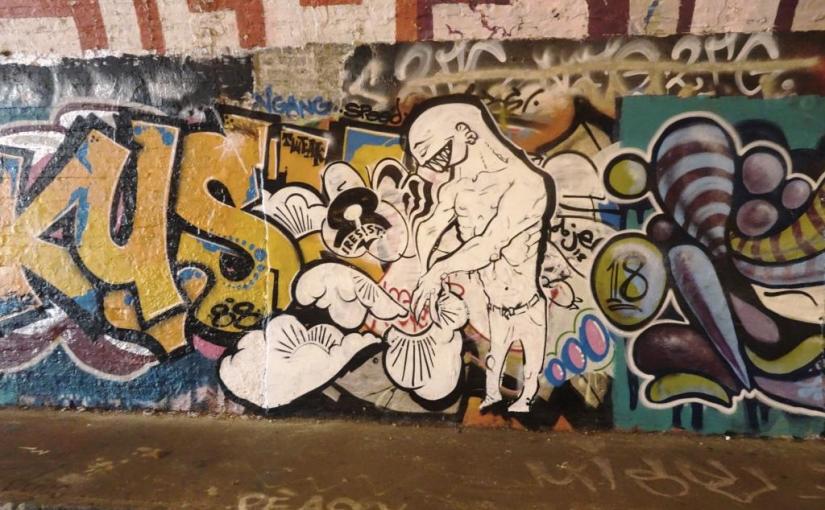 With his style so unlike anything else in Bristol, it is easy to pick out Object…’s work wherever he places it. This piece in St Werburghs tunnel features a distorted humanoid monster – a thing of nightmares – doing something, although I’m not too sure what. As with all his work Object… has a real sense of physiology and plays with proportions and muscles and limbs – the art of the possible.

Themes in his work often reflect the unfairness in our society and he tirelessly represents the rage felt by many at injustice. He is probably the most politically motivated in Bristol and his agonising plays out in his work. Tortured, compassionate, angry and sad, his work carries with it huge emotional investment. All good.

The conscience of our city is given a voice or at least a ‘visual voice’ via the prolific and passionate work of activist Object… . Without doubt, Object…’s work is moving, angry and political in equal measure and his ‘tortured’ figures represent pain and suffering of others.

In this piece the figures are in conversation with one or both saying ‘or you could handle it with some compassion‘. I’m not too sure to what this refers, but I think the message could be read on several levels, from the personal to local to national or even global level. We are living through hard times and compassion is taking a real beating. I’m sure these lurches to the right will come to an end, but for the time being we must endure them and push back wherever possible. 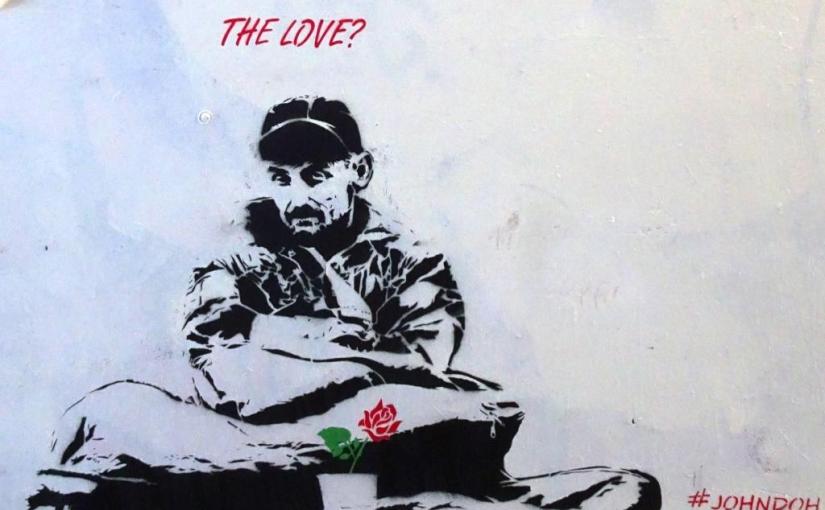 I recently found out, from reading an interview with John D’oh, that he tends to create these single layer political stencils for places like The Bearpit, where their lifespan may at times be only a day or two. His more complex multi-layered work is reserved for walls where longevity is more likely…an utterly understandable position.

This piece is highly critical of Theresa May and the growing problem of homelessness and rough sleeping that is plaguing towns and cities across the UK. I really like the work he does and the way he uses his art to express political ideas. Much of his artwork tends to encourage ‘embellishment’ from passers by, and this one is no exception. The ‘cock and balls’ motif being put to good use.

John d’Oh has been very busy lately on the streets of Bristol, but this is the first time I have seen his work in Leonard Lane. Typical of his work, he takes a strong political line, and in this stencil he celebrates a Corbyn revolution.

This is beautifully worked, and of course I particularly like it because of its edge. There are many more pieces by John d’Oh that I have in my archive and I might have to start bunching them together, simply to be able to share them. 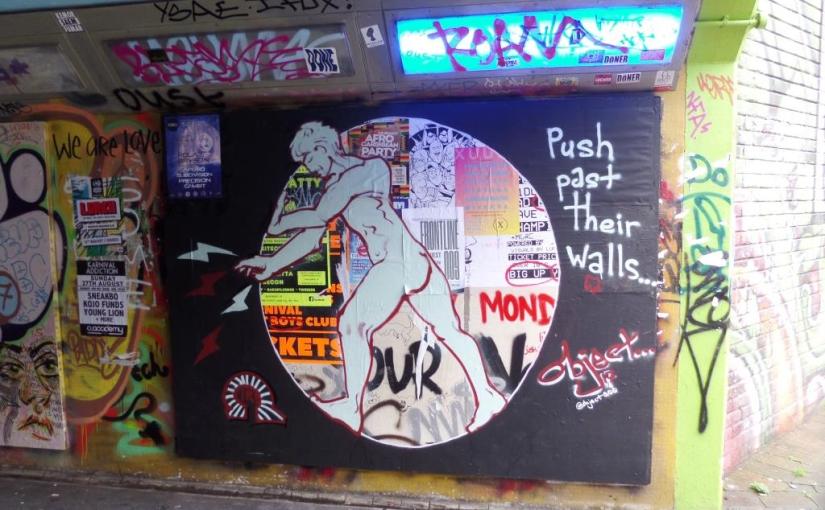 Object… has been busy in The Bearpit again, with a flurry of political pieces. This one cleverly uses the existing posters that were pasted to the wall as a colourful and contextual backdrop to his central piece.

This is a really good piece, creative and imaginative, and always with an edge that we expect from Object… . The character is imprisoned in a circle and encouraged with the words ‘push past their walls’.

There is a strong feeling of movement and momentum in this piece and it works really well for me, but it would, wouldn’t it?

You can be pretty sure that when Goin takes to the street, the work he produces will have an edge and political aspect. His piece for Upfest was no exception this year. He has created a large monochrome stencil of a traditional working-class paperboy holding up a newspaper with the words ‘Bullshit’s Tories’.

I believe that Goin is French and this might give us a clue to the slightly curious wording. It is obviously an anti-Tory slogan, but doesn’t quite read right. It matters not one jot though, because it is pretty overt either way, and the piece is really powerful.

I like Goin’s work a lot, but was very slack last year, and missed out on his main Upfest piece. It was slightly off the main drag, and by the time I went to photograph it, it had gone. Not this year.