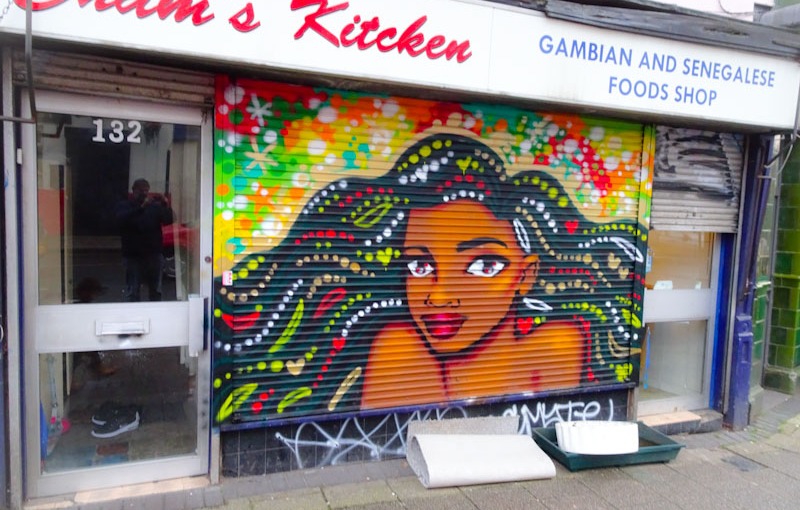 Shutters have become a much prominent feature of the city this year because of the increased frequency that shops have had to remain closed due to a sequence of lockdowns and restrictions. This has offered up an opportunity for street artists to either paint new shutters, or for older shutters to be appreciated by a wider public. I guess I am looking for a silver lining to this terrible pandemic… clutching at straws maybe.

Anyhoo, this is a wonderful addition to the shutter pieces from Pekoe, who has hit a bit of a purple patch lately. I love this portrait, the way it fills the space so perfectly, slightly off-centre and the face is in three-quarters profile, which I love. The woman’s black hair and decorations are particularly nicely done. I think that this is my favourite shutter piece of the year. Bravo! Pekoe. 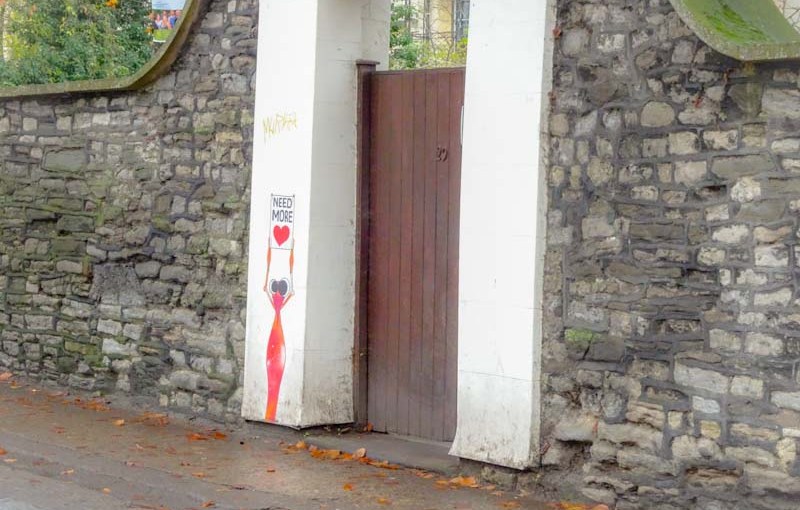 Guess who has been back in town… yes it’s qWeRT and this is the first of a few new wheatpastes I have found dotted about the place. I actually took this picture from the car window (I was in a traffic queue for lights) because I am inherently lazy and also because I was sitting right next to it and the opportunity was too good to miss.

I am really liking qWeRT’s theme at the moment which is centered around love, something we could all do with a little more of these days. I travel along this road often enough to guess that qWeRT’s visit to Bristol was within the last fortnight or so. I’m keeping my eyes peeled for more of this googly eyed sprite… watch this space. 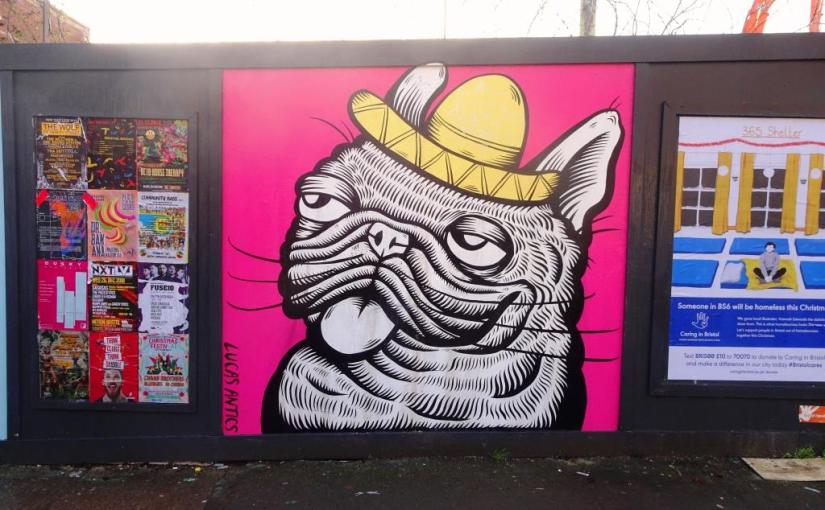 What a superb piece by Alex Lucas in the heart of Alex Lucas land. The artist and illustrator fills a niche in the Bristol commission market and is probably one of the most recognised artists in the city. Because nearly all of her work is commissioned, it tends to remain in situ for a very long while.

This piece, wonderful as it is..and it really is…leaves me a little conflicted, not because of the artwork, but because before the development work behind the hoarding started, this used to be a regular ‘illegal’ wall for artists to try out their work, much of it outstanding. This is the gentrification process in full swing, the succession being; Illegal (tolerated) wall – permitted/commission wall – no wall (policed).

It is a sad but inevitable journey for most of our inner cities, and these areas are often in need of some TLC. My objection is that what will emerge from behind the hoarding will be unaffordable flats, little in the way of community assets and a sterilisation of a colourful area. The only people to benefit will be the people with money and power.

Let’s enjoy the hoardings while we can. 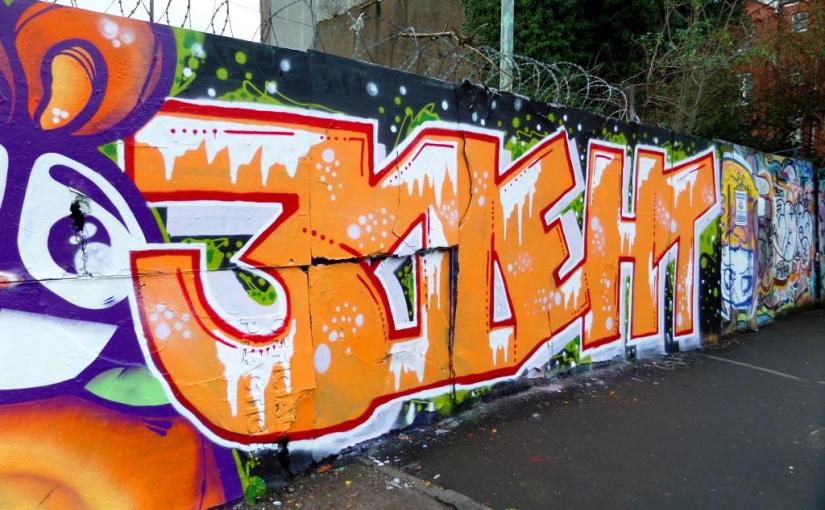 I like collaborations, I think they shed the street art community in a good and friendly light. This particular one is between Mr Draws, the writing, and NEVERGIVEUP whose bunny is unmistakable.

After his phase of spraying monsters everywhere it seems that NEVREGIVEUP has resumed with his rather friendly rabbits, there are a lot of them about, which is fitting I suppose.

The Mr Draws writing is playing with an idea he has used before, which is to spell out ‘draw’ in German (Zieht) and replacing the Z with a 3. I think however, that this word draw means to pull like drawing water from a well, but don’t quote me on it…I know no German at all. A fun collaboration. 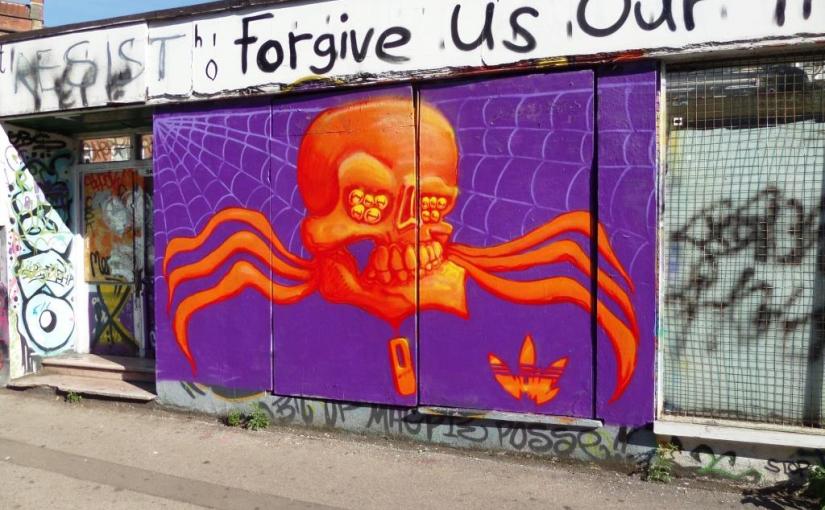 You might have noticed that I am posting quite a few old pieces at the moment. I tend to do this from time to time when I look through my files and see some wonderful stuff that I never got round to sharing. Sometimes I have been holding onto pictures where I didn’t know who the artist was, but that was not the case here. Somehow this wonderful Laic217 piece just got through the net.

A spider with a skull and an Adidas logo (disguising the word Laic) – it is all here and a bit weird, but brilliant and such a striking combination of colours. The biologist in me feels I should point out that spiders have eight legs, but that is probably splitting hairs. A Fine piece from July 2017.

This is the second piece by Fiva (Fiver) to appear on this hoarding in recent weeks, the first was featured in a post recently and that one was the first work I have seen from this artist in a while. It seems he is on a roll, and that his inspiration would appear to have come from (I think) recently becoming a father.

I do like these kind of writing pieces which conflate words and styles to create a layered puzzle. This is accomplished work from a good artist, and I’d like to see more of his work on the streets – as a new father though I expect his opportunities might be limited. 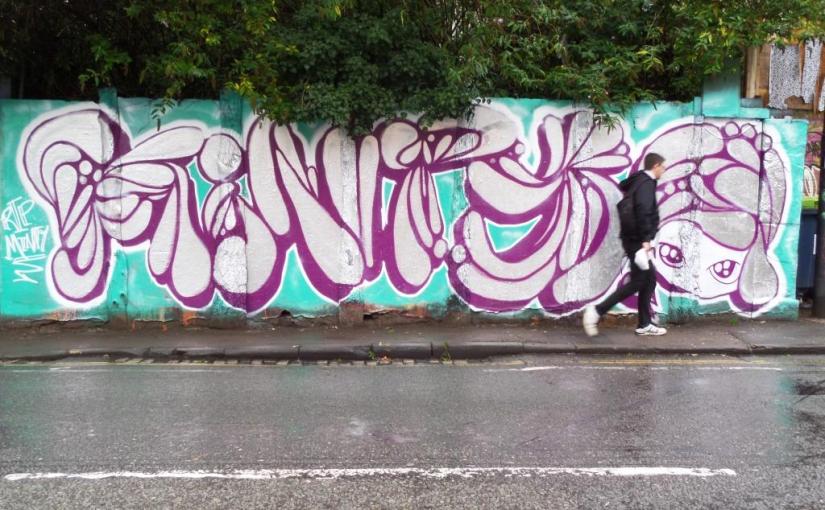 This is the first of two tribute pieces in this exact location by Face F1st honouring Minty. My research about Minty has yeilded nothing, but his name has cropped up on a few pieces in recent times.

So this is a departure for Face F1st who normally writes FACE and incorporates the face into the lettering. The letters M I N T Y are more aggular and do not lend themselves to the incorporation of a face so well. Instead the face is added on to the end of the piece. I don’t think I have ever been disappointed by Face F1st’s work and this is another lovely piece. 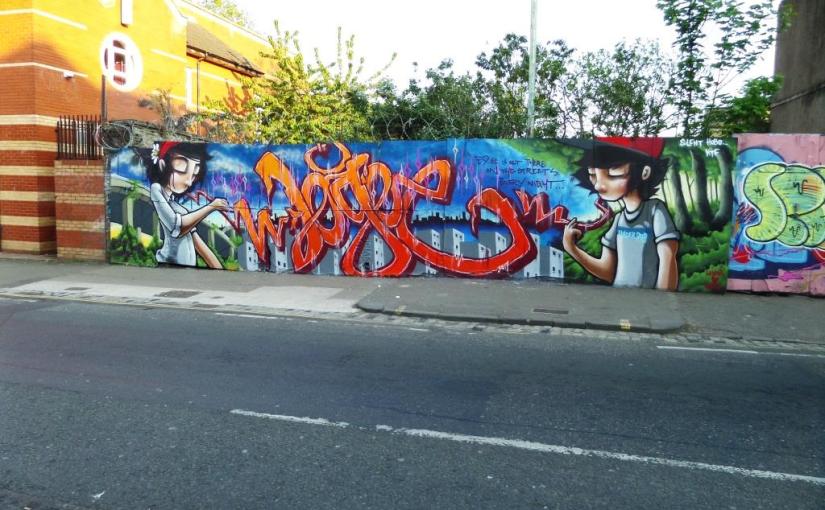 Some real luck with this one. I was returning from dropping my niece off at Temple Meads station and deliberately drove home via a few graffiti spots, and whose work should I see on the hoardings at the top of Ashley Road…Silent Hobo.

I hadn’t seen or met him before so I wasn’t going to miss this chance and found a place to park and went to introduce myself. He was spraying with another artist who was working on the wildstyle writing in the middle of the piece. This was Logoe, who I was told by Silent Hobo is a celebrated Bristol graffiti artist from years gone by, and has just returned to the city – this is his first back since his homecoming.

Both were absolute gents and didn’t appear to mind me stopping to watch a while and chat a bit. I asked why Silent Hobo had appeared to have a break and was now, over recent weeks, churning out pieces very regularly…well it was all down to childcare…ah the freedom that childcare affords us parents.

The piece is in an area that tends to get very badly tagged very quickly – it will be interesting to see how long this lasts. So far it has survived two weeks unscathed – recognition of the status and quality of the work. 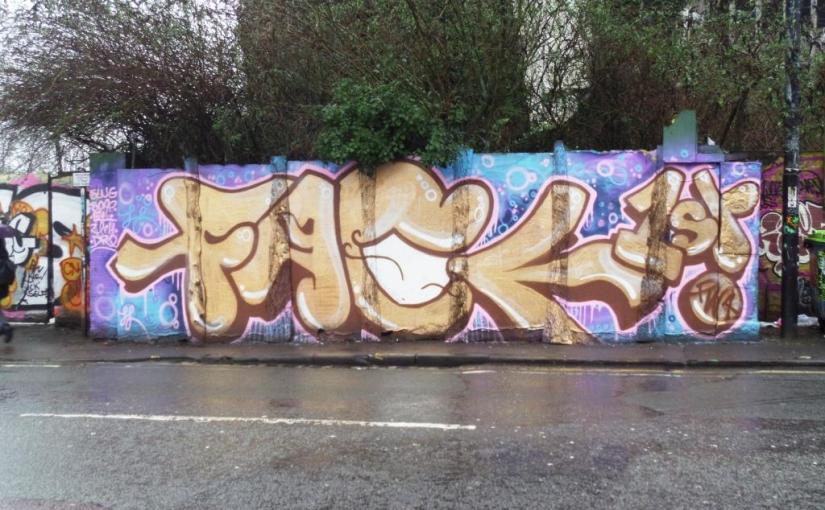 This is one of the spots that is favoured by Face F1st, he does a lot of pieced on this hoarding, and on the Carriageworks just around the corner. Any regular reader of my posts will know just how much I enjoy Face F1st’s work. It is frustrating, however that I know so little about this artist. I guess I’ll have to be out there and find him spraying sometime.

As we so often see, Face F1st has used great combinations of colours which he tends to use a lot, golds and lilacs. He has tagged this with his crew PWA. 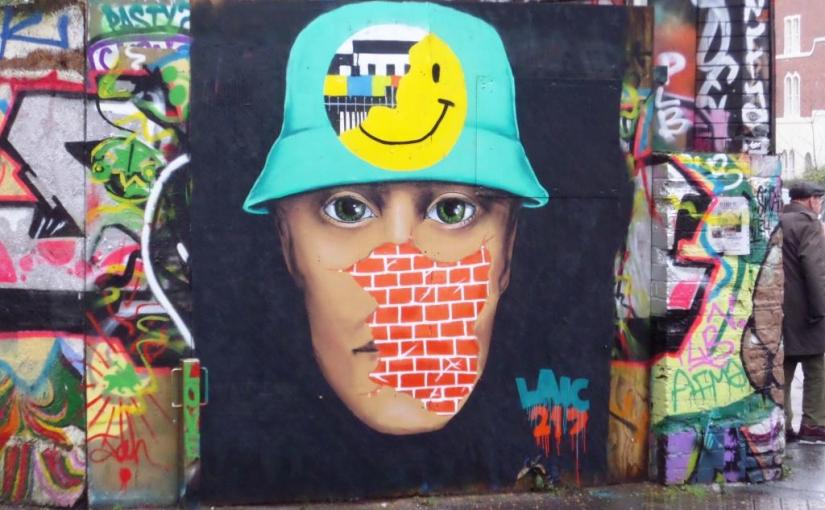 More from the incredibly prolific Laic217. This time the piece is in a major ‘hotspot’ where it can be seen by a great many cars and passers-by. He returns to one of his favoured motifs, the distorted/disfigured face with hat and references to acid. Also he has incorporated his liking for brick walls, which works really well here.

Another feature of this work is the reference to the test card transmission – something that TV viewers over a certain age will be very familiar with. One of the most pleasing things about this particular site is that the rather officious notice that was plastered over one of Aspire’s pieces here has been completely sprayed over – a victory for graffiti art.

It doesn’t stop here, still more to come from this artist who is really beginning to make his mark.