The People’s Republic of Stokes Croft outdoor gallery is a great ‘showcase’ wall that is properly curated and well respected. Rarely is this wall tagged or despoiled in any way. One of the key carers of this wall is Object… so it is great when he gets to put a piece of his own work up, and in this case as part of a collaboration with Msale.

The collaboration breaks down into three panels and picks up on the coronavirus pandemic theme. On the left we see two people hugging the planet earth which is wearing a face mask, the emblem of 2020.

The middle panel is a ring and circle of text in a calligraphy style. The outer ring says “apart; together; stay safe”. The inner circle is in a script I can’t read and might be Arabic or something like that.

On the right is a masked portrait with the word ‘hope’ underneath it and to the right are the words ‘Baki salama’ which means stay safe.

Overall this is a contemporary and uplifting piece from two fine artists. 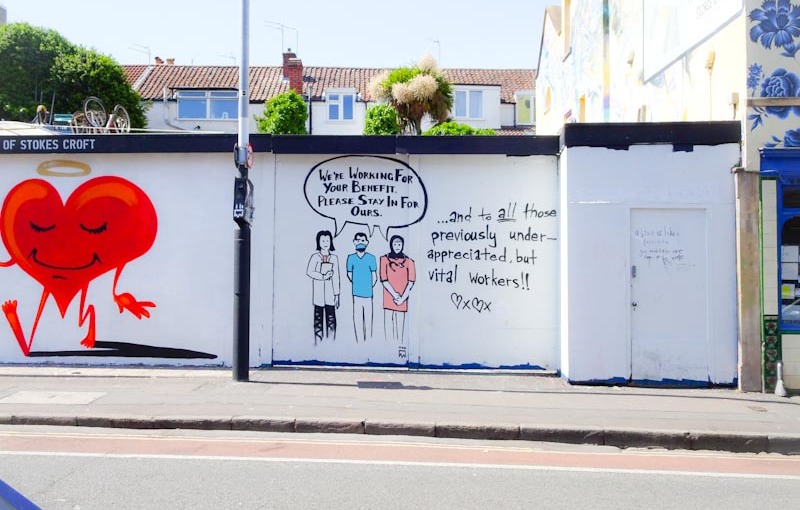 The public conscience of Bristol is often provided by Object…, a little bit like Jimini Cricket in Pinocchio. If there is an issue about common decency and care of your fellow citizens, then Object… will be there as a champion. So there are no surprises that this artist produced this coronavirus piece during lock down.

Object… has close associations with the PRSC outdoor gallery, which he seems to curate, so this wall in Jamaica Street was a safe bet. I love this piece. It says all the things I would want to say and reminds us of a time when compliance with the rules was the norm.  The recent relaxations following on from the Dominic Cummings scandal have added up to a sense of selfishness and free-for-all that I just don’t get. Sometimes I truly despair.

This piece is beautifully illustrated with excellent illustrations of NHS workers and is painted with love. Nice one.

FTurbo Island is a dynamic spot in Bristol. It is in the heart of Stokes Croft and attracts a spectrum of visitors, many high or drunk, who use the space to sit and while away the day. It also has a nice wall that the People’s Republic of Stokes Croft (PRSC) try to curate, but tagging is a real problem here which is a great shame.

I decided to go ahead and post this beautiful portrait by Hazard in spite of the tags because I don’t  think it had been up for much more than a day when I photographed it. I spoke to Hazard about it when I met her at the Cheltenham Art Festival and she was fairly philosophical about it and said ‘well it’s Turbo Island, isn’t it?’.

The portrait is another in shades of blue and red and is really beautiful. There is something even more annoying about the tags that are indiscriminate in their destruction, can’t the DBK lot appreciate beauty? Are they incapable of leaving some beautiful things alone? Untouched it would have looked a little bit like the pieces below: 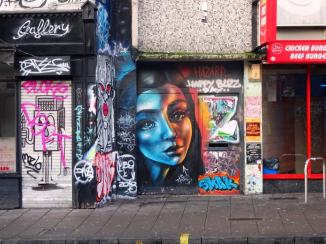 I became aware of this piece of work when I saw an Instagram post from Tasha Bee describing a collaboration on Turbo Island, Stokes Croft with Mr Draws. I decided to walk home…I usually get the bus because I don’t feel as fresh as in the mornings…and what a good decision that was.

By the time I got to Turbo Island I had already found two new pieces in roads I don’t often visit, which was a great start, and Mr Draws and Tasha Bee were just finishing off and tidying up.

This wall hasn’t been sprayed for a long time, and a collection of artists supported by the People’s Republic of Stokes Croft (PSRC) are trying to resurrect it as a ‘legal’ wall with a regular turnover. This is a risk, because the site is prone to impromptu parties and gatherings and often gets pretty messed up.

The collaboration itself is rather lovely, with Mr Draws’ multicoloured mountains and two figures by Tasha Bee and the message in both Latin and English ‘All things are in common’, which expresses the idea that the world belongs to everyone, rather than the way society is organised where the disposessed and dominated are overlooked to the benefit of the few.

Sadly the piece was tagged less than 24 hours later – predictable but annoying really.

This is the third piece from the PRSC outdoor gallery that featured Boogie and Voyder, and is by the organiser of the ‘Boogie Down Bristol’ event and all round godfather of Bristol graffiti, Inkie.

This is a really wonderful piece from Inkie, and I think he was pulling out all the stops on this one to show Boogie what he was made of. The colour selections are great, and match those used by Boogie on the far left of the three. Voyder was clearly on his own agenda.

A few weeks ago this stunning and touching tribute piece appeared on the People’s Republic of Stokes Croft (PRSC) outdoor gallery wall. It is a wonderful collaboration between The Paintsmiths and Ryder.

The tribute is to Raphael Dufresne, a popular musician on the local scene who passed away on 14 April 2017, suffering a fatal aneurism whilst at the gym. He was only 27 years old. This piece fills me with a sadness, but what a magnificent way to celebrate his life.

I never heard his music, and feel sorry that I never had the chance of seeing him, it sounds like he had a good soul and attitude to life. He had links with PRSC, which is why this tribute is all the more poignant. Really terrific letters from Ryder and a superb portrait by The Paintsmiths. Sad.

Following on seamlessly from from post 165 you can see that the PRSC outdoor gallery in now occupied by Soker and 3Dom.

There is a lovely thread of vapour that joins the two pieces coming from the mouth of the curious 3Dom creature on the right (when ever was a 3Dom piece not curious?) and weaving around the Soker burner.

I love these collaborations that bring together wildstyle burners with more conventional art pieces – more will follow.

Jamaica Street is home to the People’s Republic of Stokes Croft (PRSC) outdoor gallery. To anyone who walks around this area, this wall is a regular stop off point.  This wonderful wildstyle burner is by DNT and partners the bear by Mr Sle7en that I featured recently.

The whole piece spells out ‘Bristol’ and uses the fabulous colours to bring out the design. This piece always cheered me up in the mornings on my way to work, and supports the theories that say that street art brings about a sense of civic pride and coherence. It is certainly the case in Bristol.

The piece has now gone and been replaced by a collaboration between Soker and 3Dom – see my next post.